Another NA session marred by scuffles 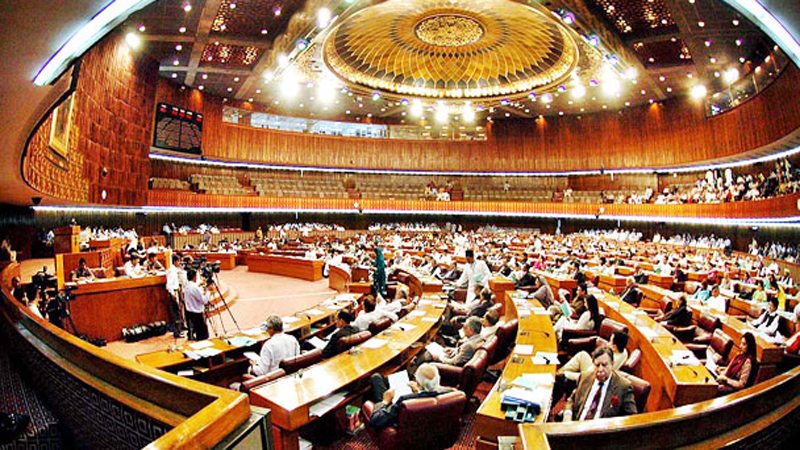 Another session of the National Assembly was prorogued on Thursday for an indefinite period without any logical conclusion on the 26th Constitutional Amendment Bill seeking open Senate vote and giving right to dual nationals to contest the general elections.

The session began with rucks, slogans and heated arguments against each other, and desk thumping by opposition and treasury benches, while it ended into scuffles. Deputy Speaker Qasim Khan Suri, who chaired the session, was finally compelled to announce the adjournment.

The NA’s course of proceeding started from the question hour. At the point of time when a parliamentary leader, Shokat Ali, started his response to a question of his colleague, the opposition legislators started thumping desks. The deputy speaker gave the mic to PPP’s Syed Naveed Qamar who wished to pose a supplementary question related to the recent horrible incident at Srinagar Highway Islamabad in which Kashmala Tariq and her son’s over-speed luxury vehicle crushed a car and two bikers. The accident claimed four lives and left two persons seriously injured.

Naveed Qamar said that “addicts should not be allowed to drive or to rule the country”. Sher Akbar Khan said that deceased’s heirs should be given government jobs and some financial assistance as well, adding that it’s also surprising that the murderers of four precious lives got bail for only Rs 50,000 surety bonds within five hours. The custodian of the House said the matter was sub judice, so it could not be debated on.

The protest gradually increased and reached its peak when Adviser to Prime Minister on Parliamentary Affairs Babar Awan started reading the Pakistan Telecommunication Ordinance 2020, which he asked the speaker to lay down in the House.

All opposition members left their seats and gathered around the speaker’s dais. Awan hurriedly concluded his speech on the laid bill and Foreign Minister Shah Mahmood Qureshi got his turn to speak. As he started talking, PPP leaders Raja Pervez Ashraf, Hina Rabana Khar, Syed Naveed Qamar and Shazia Marri stood up on their seats and started interrupting the minister, sparking another heated debate.

The minister’s speech was not audible from the galleries due to the noise. As much as it could be heard, he said that this is tantamount to humiliate the august House. “This is not the way to run the House. If you want to say something that’s your right, but you have to listen to others first as well,” he said. He added that “such behaviour would not be tolerated.”

Special Assistant to the Prime Minister on Political Affairs Malik Aamir Dogar went to the PPP leaders, requesting them to be calm, but in vain.

After a while, PML-N Rubina Khalid with her one of her colleagues rushed to the parliament’s lobbies and returned with placards, which she distributed among the opposition members surrounding the speaker’s dais. The placards were inscribed with slogans against the government’s policies that led to inflation.

Some lawmakers on the treasury side, including Fawad Hussain Chauhdry, started recording the protest scenes on their mobiles with a smile on their faces, by which it could be easily determined that the treasury legislators were enjoying the House’s unrest.

When crosstalk touched its peak, it turned into scuffles between the government and opposition sides. The scuffle erupted when Naveed Qamar took the mic down from the deputy speaker’s dais in protest, after which the speaker immediately suspended the House business while announcing its adjournment.

Earlier in his speech during the question hour, Federal Minister for Power Omar Ayub challenged any opposition member to contest the election against him, saying that he had gotten elected by beating a PML-N rival candidate by a margin of 40,000 votes.