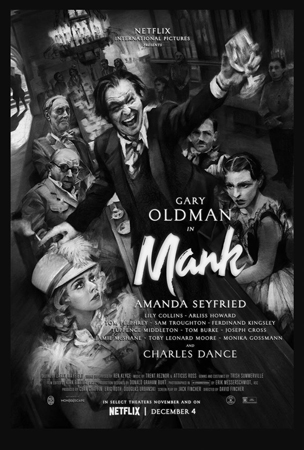 The film about Citizen Kane co-writer Herman Mankiewicz, landed nominations for best film, drama; best actor for Gary Oldman; best director for Fincher, best supporting actress for Amanda Seyfried; best score; and best screenplay for Jack Fincher, the director’s father who penned the script before dying in 2003. Screenwriter and producer Aaron Sorkin’s ‘The Trial of the Chicago 7’ – which, like ‘Mank,’ is a Netflix release – came closest with five nominations, including nods for best film, drama; best director and best screenplay for Sorkin; supporting actor for Sacha Baron Cohen and best song.

The other nominees for best film in the drama category were filmmaker Chloe Zhao’s ‘Nomadland,’ Emerald Fennell’s ‘Promising Young Woman’ and Florian Zeller’s ‘The Father.’

A year after fielding no female nominees for best director – or best feature film nomination for any movie directed by a woman – the Hollywood Foreign Press nominated more female filmmakers than it had before.

Regina King, Zhao and Fennell were nominated for best director, alongside Sorkin and Fincher.

Screenwriter and producer Aaron Sorkin’s ‘The Trial of the Chicago 7’ —which, like ‘Mank,’ is a Netflix release —came closest with five nominations, including nods for best film, drama; best director and best screenplay for Sorkin; supporting actor for Sacha Baron Cohen and best song

Netflix, which topped all studios at the Globes last year, too, led with a commanding 42 nominations, with 22 coming in film categories and 20 in television.

The nominees for best television series, drama, are: The Crown; Lovecraft Country; The Mandalorian; Ozark; Ratched.

The nominees for best television series, musical or comedy, are: Schitt’s Creek; Ted Lasso; The Great; The Flight Attendant; Emily in Paris.

The nominees for best motion picture, foreign language, are: Another Round; La Llorona; The Life Ahead; Minari; Two of Us.

The Globes are typically the first major show of Hollywood’s awards season, which ends with the crowning of the best picture winner at the Oscars. They’ll retain that distinction, despite being delayed nearly two months, after a surge in virus cases in recent months pushed the Grammy Awards to March.

Hollywood’s strange and largely virtual awards season lacks the usual kind of buzz and red-carpet glamour that the Hollywood Foreign Press Association annually feasts on. More than perhaps any other award show, the Globes depend on a cavalcade of stars – something that won’t materialize when the awards are handed out February 28 in a ceremony hosted by Tina Fey and Amy Poehler. The Hollywood Foreign Press Association said Tuesday that the Globes – typically a bubbly dinner gathering with flowing drinks – will be held bi-coastally for the first time. Fey will host live from New York’s Rainbow Room and Poehler will host from the awards’ normal home, the Beverly Hilton Hotel in Beverly Hills, Calif. It’s expected that nominees will appear from locations around the world.

This year’s Globes were postponed nearly two months because of the pandemic and to adjust to the delayed Oscars. Those are set for April 25. Last year’s Golden Globes culminated in awards for 1917 and ‘Once Upon a Time … in Hollywood.’ The telecast, hosted by Ricky Gervais, couldn’t buck the overall ratings trend for awards shows, drawing an average of 18.3 million viewers, down 2 percent from the previous year.