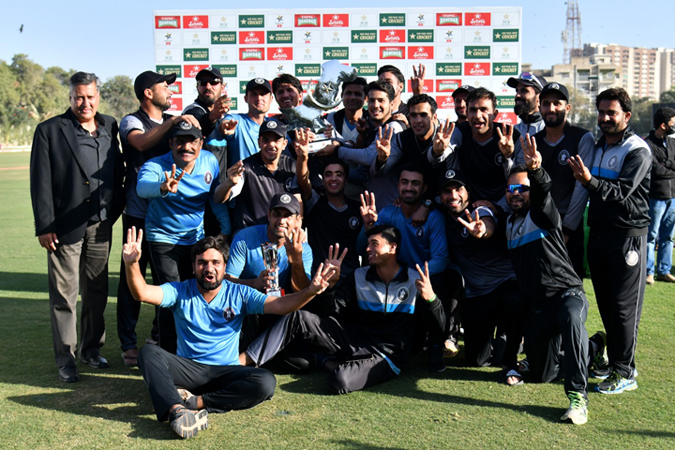 KARACHI: Khyber Pakhtunkhwa made a hat-trick of First XI domestic titles for the 2020-21 season as they clinched the Pakistan Cup One-day Tournament 2020-21 with a resounding seven-wicket victory in the tournament final against Central Punjab at the State Bank Stadium here on Sunday. Opener Sahibzada Farhan who starred in the semifinal victory against Northern with a 132-run innings, took the centre stage in the final with a brilliant unbeaten 103 off 102 balls, the right-hander hit five fours and as many sixes in his innings(seventh century of his List A career) to ensure a commanding victory for his side. Farhan added 69 runs for the first-wicket with Musadiq Ahmed (33) to provide his side a solid platform for their 240-run chase. Aamer Azmat who batted at number three, scored 45 off 28 balls (four fours, three sixes) in a 66-run second-wicket stand with Farhan.

Iftikhar Ahmed contributed 40 off 35 balls (three fours, two sixes) in a 69-run third-wicket stand with Farhan. Farhan reached his century with a six while Adil Amin played the winning shot as the jubilant Khyber Pakhtunkhwa side completed the chase in a mere 36.1 overs. Khyber Pakhtunkhwa who had won the National T20 Cup and the Quaid-e-Azam Trophy (joint winners with Central Punjab) completed a hat-trick of titles in the 2020-21 season by adding the glittering Pakistan Cup trophy to their glittering collection besides the PKR5million winners’ prize. Central Punjab bagged PKR2.5million.

Earlier, Central Punjab were asked to bat first by Khyber Pakhtunkhwa captain Khalid Usman. After a 42-run for the first-wicket, left-arm-pacer Mohammad Imran sent back Rizwan Hussain (20). Opener Tayyab Tahir held the innings together as wickets fell at regular intervals at the other end. The right-hander scored 67 off 88 balls (one four, two sixes) top-score for his side. Tayyab was the fifth-wicket to fall with the score at 167. Raza Ali Dar who added 83 runs for the third-wicket with Tayyab scored 48 off 45 balls with the help of seven fours.