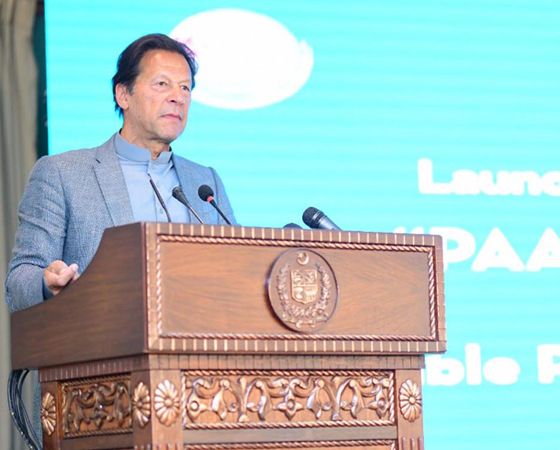 Prime Minister Imran Khan Thursday said that economic self-dependence and long-term planning are inevitable for country’s development as country suffered in the past owing to short-term approach of the previous governments.

Addressing the launching ceremony of a docu-drama ‘Pani Ke Pankh’ here, the prime minister advised against the approach of appeasing others to create a ‘soft image’ of Pakistan. He said economic self-dependence is the only key to earn respect in the comity of nations. The nations surviving on others’ support and loans can never earn dignity, he added.

“I repeatedly hear we need to present a soft image of Pakistan. What does a soft image mean? Why do we say this and if this soft image is established will the world consider us very good?” he said. “We shouldn’t fall into this kind of misunderstanding; this is an inferiority complex. When a nation loses it confidence it tries to please people,” he emphasised.

He said people shouldn’t plan their actions based on what Western countries would approve, citing the example of the vision of ‘enlightened moderation’ introduced by former military ruler retired Gen Pervez Musharraf. “We heard the term ‘enlightened moderation’ for the first time in our lives. Nobody knows what it means. Most people understood it that the more we resemble people in the West the more we will appear moderate. So people started speaking English and wearing Western clothes, and [thought] they had become moderate,” he said. “Is this moderation? Please understand this is inferiority complex.”

Imran Khan said Pakistanis only had to promote one image: that of an independent nation standing on its feet which believes in itself, doesn’t rely on anyone and doesn’t take loans from or beg anyone. “Only then does the world respect you,” he said, stressing that a nation that is self-reliant and thought big held the true honour. So the nation shouldn’t think we go around pleasing the world, presenting a soft image,” he added.

The prime minister said the first blunder was to join the US-led war against terrorism after 9/11 which inflicted huge loss to the country. He said the country can only survive when the people pay taxes to enable the government run state affairs like extending education and health facilities to the masses. He said Pakistan is rich with huge potential and all what needs to be done is to boost confidence in own capabilities.

“We entered someone else’s war which wasn’t ours, we should’ve never joined it,” he said, adding that Pakistan had first taken part in ‘glorifying jihad’ in the 1980s and making the Mujahideen ‘heroes’, and later pursued them as ‘terrorists’ on instructions of the US after 9/11. “So the country inevitably had to pay a heavy price for it.”

In this context, the premier said, people “shouldn’t think we need to present a soft image of ourselves because they (the West) started calling us ‘terrorists’.” “You can never enter someone else’s war, take benefits from them and not suffer for it,” he stressed.

He said the potential in Pakistan was unmatched by any other country and the nation tended to ‘undersell’ itself. “Until our thinking remains that we can’t do anything until someone from the outside gives us loans due to our soft image, we can’t move forward,” he added.

He lamented that Pakistan had to suffer tremendously due to the flawed policies of becoming part of foreign conflicts in return for aid. “But we have to learn from these mistakes that there is no free lunch,” said the prime minister. The past mistakes, the premier said, give lesson that we need to make our country strong so it does not need to ask for loans and aids from other countries. He expressed hope that Pakistan will soon ‘stand on its own feet’ once the nation realizes that they have the potential to excel in all fields.

Highlighting the importance of long-term planning in nation-building, Prime Minister Imran said in Pakistan, governments tended to want to finish projects within their five-year tenures so they could be shown to the public by spending billions in advertisements in order to win the next elections. One of the biggest damages caused by this ‘handicap’, he said, was that even though hydropower in the country was cheap and water reservoirs beneficial for agriculture could have been built, the past governments made decisions for the short term due to which the electricity produced by Pakistan was today among the most expensive in the subcontinent.