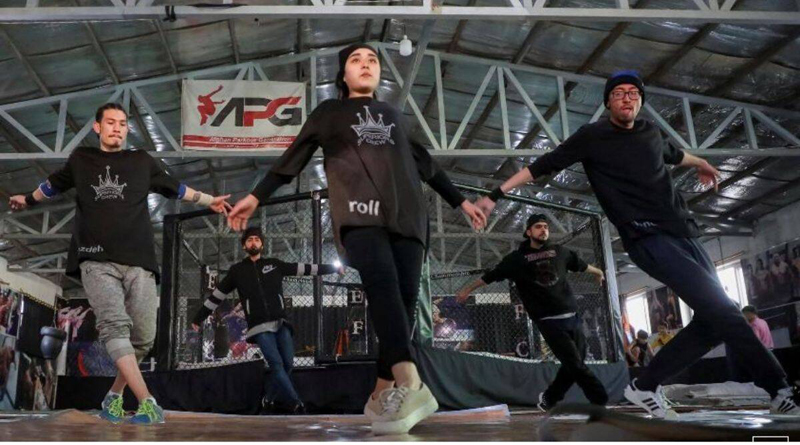 KABUL: When 18-year old Manizha Talash joined a small but ardent breakdancing community in Afghanistan a few months ago she was the only woman, but she already aims to represent her country in one of the latest sports to be admitted to the Olympics. Dressed head to ankle in black for training, Talash wouldn’t look out of place in a dance studio anywhere in the world, but in Afghanistan’s conservative, Islamic society she stands out for being courageous enough to pursue her dream.

“I want to be different,” Talash told Reuters as she waited for the start of a session at a mixed martial arts centre in Kabul. “I want to become a good role model in Afghanistan.” Many conservative Afghans frown on dancing of any description, and even more vehemently object to a woman’s public participation – some of them violently. Talash says she has received death threats, but she’s still dancing. Just being female can be dangerous in Afghanistan. Girls schools were frequently targeted by militants during the past two decades, and in May last year 24 people, including 16 mothers, were killed in a horrific attack on a maternity ward.

Progressive-minded Afghans fear gains in women’s rights since a militant government was ousted in 2001 may be at risk as their government engages in peace talks that could end up giving the militant more say in the country’s future, while the United States prepares to withdraw its last remaining troops. “When I think about the possible return of the militant and that maybe I cannot continue practising breakdancing, I become very upset,” said Talash. “I want to be a role model, a person who has achieved her dreams.” Founded a year ago in Kabul, the club she belongs to now has over 30 members, of whom six are female, and they gather three times a week to practice the acrobatic moves, including headspins, that are hallmarks of breakdancing.

“I think it is very good that women can do such a sport like break-dancing,” said breakdancer and instructor Sajad Temurian. “We have four years to train more girls in Afghanistan to introduce at least one or two of them as breakdancing athletes to the international community (at the Olympics).” Breakdancing, an art form which was born on the streets of New York City in the 1970s, was among four sports, along with skateboarding, sports climbing and surfing, that the International Olympic Committee agreed recently to add to the Paris Games in 2024 in an effort to attract a younger, more urban audience. “This (sport) is very tough, and you have to have a strong physique to learn and do it….it isn’t easy, but nothing is easy, you can learn and achieve the goal,” Talash said, adding some moves require an athlete to lift their entire body weight on one arm. Talash doesn’t say so, but her bravery could be a more valuable quality than her physical strength.