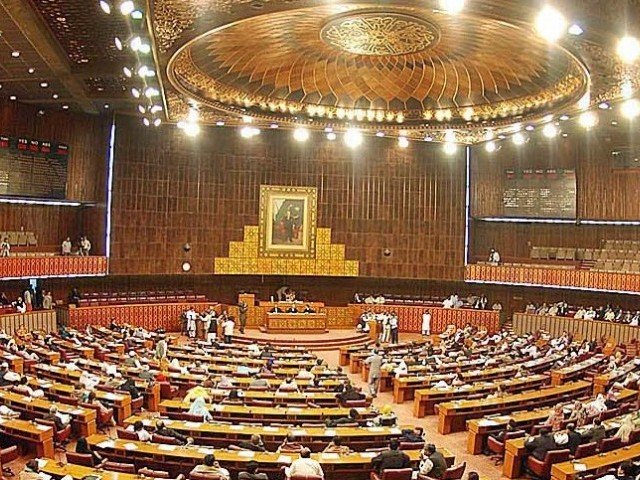 The National Assembly (NA) on Tuesday prohibited members – whose membership has been suspended by Election Commission of Pakistan (ECP) – from attending session.

This was ruled by NA Deputy Speaker Qasim Suri, who also chaired the session in absence of speaker Asad Qaiser. The deputy speaker said that to follow the country constitution, adding that to law is equal for every citizen regardless of their class or status.

“All such members should file a tax return with ECP and then get restoration from the commission to ensure eligibility to attend the session,” he directed.

The session, which started with an hour delay, observed less attendance by opposition members, particularly the Pakistan Muslim League-Nawaz (PML-N) members. During proceedings, Pakistan Peoples’ Party (PPP) leader Syed Naveed Qamar presented adjournment motion regarding announcement by the government for increase in electricity prices that was initially disallowed by the NA deputy speaker for debate and accepted when opposition record protest against this action.

Foreign Minister Shah Mahmood Qureshi said that this was a policy decision and it should not do politics on this, while debating this on the floor of the House was inappropriate, as it was not part of the agenda. On this, former prime minister Raja Pervez Ashraf said that it was a public issue and being public representatives it’s our onus to highlight and resolve such issues.

“The teachers are protesting right outside the parliament for their rights, doctors are on strike against the presidential ordinance apparently for privatization of Pakistan Institute of Medical Sciences hospital Islamabad, farmers are in trouble and many other segments of the society are facing difficulties,” Ashraf pointed. “You are saying it should not be discussed on the floor of the house, then where should it be instead of this?” he asked.

While briefing the bill he moved, Amjad Ali Khan said that aimed universities would impart education on culture, arts, history, architecting, literature and many other fields of academics.

James Iqbal recalled that many citizens die every year while kite flying that is alarming. He added that due to non-absence of any law many precious lives are lost. “Due to this it’s direly needed to introduce and in place the legislation in this regard,” he stressed.

Most of the bills presented by the opposition members have been rejected for proceeding with majority vote in the house. This annoyed Mohsin Dawar as he said that the bill movers should be given a chance for elaboration instead of rejection on the basis that the bills were being presented by any opposition benches lawmaker. To respond to this, PTI’s Maleeka Bukhari claimed that every practice was done on merit, not persons’ specific. “All members in this house are equally important,” she reaffirmed.