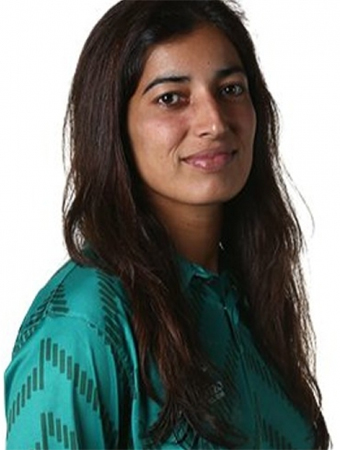 ISLAMABAD: Pakistan women cricket team faced another marginal defeat on Saturday against South Africa as the hosts went 2-0 up in the three-ODI series. In their pursuit of 253 under at sweltering Kingsmead Cricket Stadium, Pakistan, led by all-rounder Aliya Riaz, staged a remarkable comeback after being five down for 73 in 18 overs. The tourists, however, fell 13 runs short of the target. Aliya, playing her 29th ODI, scored career-best 81 – the best score in the match for both sides. Her knock was studded with seven fours and a one gigantic six off Marizanne Kapp. She made history during her 95-ball stay as she recorded the best partnership – in terms of runs – for the sixth-wicket for Pakistan with Nida Dar, who with an 89-ball 51 scored second half-century on trot and sixth overall, and the fourth highest in the history of the women’s ODI as the two all-rounders contributed 111 runs. Prior to her batting exploits, the 28-year-old had sent down five economical overs, which leaked 23 runs.

“We knew the South Africa series was going to challenge us,” Aliya, who joined Nida on the wicket at the fall of the fifth wicket, told PCB Digital. “They are a good team and the conditions here can be tough for the Subcontinent teams. We are returning to cricket after a 10-month-long gap. In the two matches, we have won small battles, but it is about crossing the line where we need to improve ourselves. This is where the recently announced Zimbabwe series will come in handy as we will get more matches under our belts ahead of the all-important ICC Women’s Cricket World Cup Qualifiers later this year.” The third and final ODI between the two teams will be played on Tuesday, 26 January. Aliya says her side will be making the most of it to strengthen team combinations and get the momentum ahead of the three-match T20I series between the two sides that will be played from 29 January until 3 February at the Kingsmead Cricket Stadium.

“The series is settled with South Africa as the winners but any team, any player will take 2-1 as a scoreline rather than 3-0. We are looking at the third match as another opportunity to go out and express ourselves and hopefully end the series on the winning note, which will get us the desired momentum ahead of the three T20Is.”