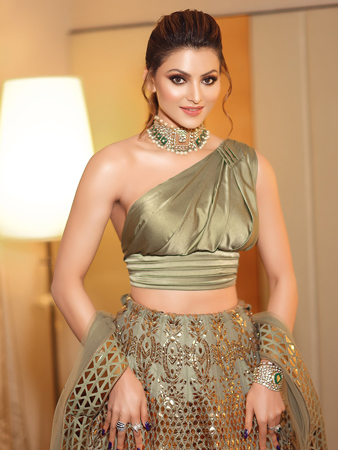 In a behind the scenes video, fans saw Bollywood actress Urvashi Rautela accidentally drop an expensive diamond bracelet while posing for a photo.

In the video, the model, dressed in a beautifully embellished sea-blue dress, lifts her hand to strike a bold pose for the picture. However, the force by which she holds her hand up causes the shiny bracelet to slip from her wrists. Fortunately, the Versace bracelet, worth lakhs, was sturdy enough to survive the fall.

Rautela later laughed off the incident by posting it on social media with the caption – ‘When you drop your super expensive diamond on the floor only girls will understand’. The video was part of a series of videos where Urvashi catwalks, while donning a couture dress by the famous designer – Amato.

Josh Yugen the CEO of luxury magazine, revealed the worth of the dress and the jewellery, stated, ‘We are honoured in Xpedition Magazine to work with India’s most beautiful actress and Bollywood’s young superstar, Urvashi Rautela’

Josh Yugen the CEO of luxury Magazine revealed the worth of the dress and the jewellery, stated, “We are honoured in Xpedition Magazine to work with India’s most beautiful actress & Bollywood’s young superstar, Urvashi Rautela. We believe that she has a royal heart, which is why we loved seeing her wear an exquisite Amato Couture dress. The dress is embellished with precious stones and is worth 7,00,000 INR. Urvashi is also wearing exclusive Versace jewellery worth 45, 00,000 INR, which makes the entire look worth 52, 00, 000 INR. We couldn’t have thought of anyone else but Urvashi does justice to the royalty of the dress.”

Urvashi Ratuela’s latest appearance was in a music video titled ‘Woh Chaand Kaha Se Laogi’ alongside TV actor Mohsin Khan. She has done three music videos till date and enjoys featuring in them, according to an interview. In terms of films, her last release was ‘Virgin Bhanupriya’ in 2020 and will be seen in the upcoming film ‘Black Rose’, which is said to be a bilingual thriller, and will be released in Hindi and Telugu. She had also made an announcement for her upcoming series “Inspector Avinash” co-starring Randeep Hooda.