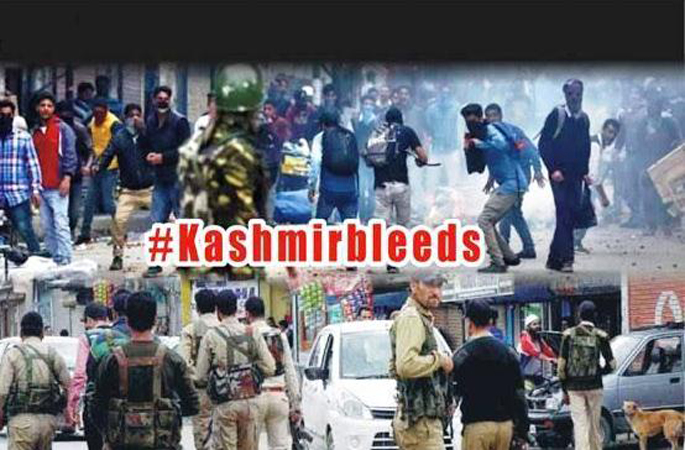 A complete shutdown will be observed on India’s Republic Day on Tuesday to give a strong message to the world that India being usurper of Kashmiris’ fundamental rights has no right to observe the day in the territory.

The Kashmiris will observe it as a Black Day to register their protest against India’s illegal occupation of Jammu and Kashmir. Call for observance of shutdown and Black Day has been given by All Parties Hurriyat Conference and other Hurriyat organizations, the Kashmir Media Service reported.

People through posters, displayed by APHC, Jammu and Kashmir Peoples League, Jammu Kashmir Liberation Alliance and Youth Freedom Fighter in Srinagar, Pulwama, Tral, Kulgam, Islamabad, Shopian, Kupwara, Handwar, Bandipore and others areas of the valley asked to boycott all Indian official celebrations and hoist black flags on the rooftops of their houses, shops and other buildings. The posters continued to surface since last one week different places of the territory.

Azad Jammu and Kashmir (AJK) President Sardar Masood Khan Monday said that India’s Republic Day being celebrated on Tuesday is the blackest day for the people of Jammu and Kashmir and all nations including Pakistan who believe in freedom and the human values. “India is celebrating its Republic Day on Tuesday and projects its state as the largest democracy in the world. But, most tragically, the edifice of this state is founded on grave crimes against humanity in the Indian Illegally Occupied Jammu and Kashmir – land and people that do not belong to India.”

He maintained that India invaded and usurped the territory seven decades ago. State terrorism and ruthless oppression have been used by successive Indian governments to subjugate the people of Kashmir. But it is the BJP-RSS regime that has broken all records of the use of brute force against Kashmiris. “India reinvaded, reoccupied the territory and laid siege to the occupied land on August 5,2019. Since then, the violent extremist regime has been busy stealing Kashmiris’ homeland, jobs and businesses,” he added.

The AJK president while strongly condemning the Indian repression said: “We strongly denounce the occupation authorities’ killing spree in Kashmir, attempted annexation of the territory to the Indian federation, illegal settlements, and transfer of Hindus from India to the occupied territory to change its demography. “This constitutes genocide and war crimes. Make no mistake; the people of Jammu and Kashmir and the world will hold India accountable. It is only a matter of time,” he warned.

On the occasion of black day, he called upon the United Nation and the influential states to intervene and save the people of the IIOJK from unbridled tyranny, torture and repression. “It is the responsibility of multilateral institutions dealing with international law, human rights and humanitarian law to come forward and rescue the besieged, unarmed people of the IIOJK. Otherwise, the UN Charter would be seen as no more than a scrap of paper,” he asserted.