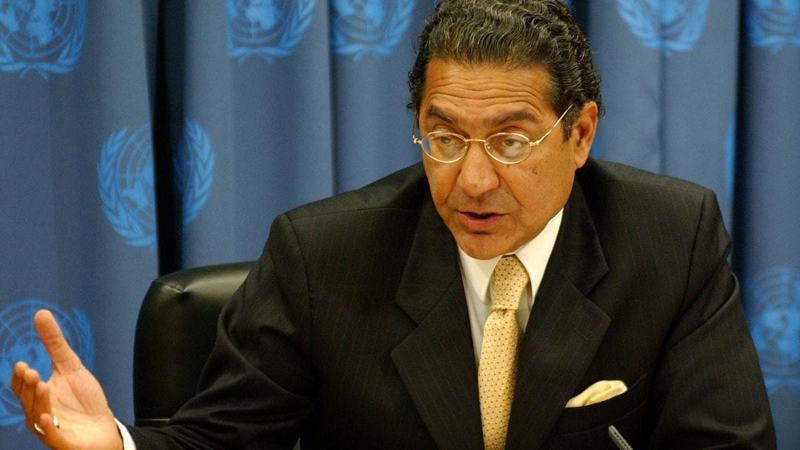 Pakistan’s Ambassador to the United Nations, Munir Akram, briefed the President of the UN Security Council, Tarek Ladeb of Tunisia, on the grave situation in the Indian Illegally Occupied Jammu and Kashmir (IIOJK) and the continuing human rights violations by Indian forces, notably the illegal incarceration and trial of Kashmiri political leaders, according to diplomatic sources.

The meeting took place soon after India began its 2-year term on the 15-nation Council as a non-permanent member.

Ambassador Akram’s outreach to the the Security Council President was part of the ongoing efforts to expose Indian “aggressive designs towards Pakistan and its illegal policies in Jammu and Kashmir,” the sources said.

They said the Pakistani envoy informed the Security Council President about India;s escalating cease-fire violations, the possibility of another Indian “false-flag” operation, as well as India’s campaign of propaganda and fake-news against Pakistan.

Ambassador Akram also briefed the Council President about Pakistan’s dossier on Indian sponsored terrorism against Pakistan, including India’s support and financing of Tehrik-i-Taliban in Pakistan (TTP) and Jamaat-ul-Ahrar (JuA), which has been communicated to the United Nations Security Council’s 1267 Sanctions Committee.

Moreover, he briefed the Security Council President on Pakistan’s role in facilitating the Afghan peace process and the threat posed by spoilers, from within and outside Afghanistan, to the process.

Meanwhile, Pakistan has warned the international community that India, emboldened by supply of advanced weapons and technologies, was operationalizing offensive doctrines into war-fighting strategies that threaten peace in South Asia and beyond.

Speaking in the Geneva-based Conference on Disarmament (CD), Ambassador Khalil Hashmi said India was pursuing policies of hegemony, subversion and domination over its neighbours, all driven by an extremist ideology and hyper-nationalism.

“This recklessness endangers regional peace and security in South Asia,” he said.

While pushing for a permanent seat at the United Nations Security Council, Ambassador Hashmi said India continues to defy with impunity the 15-member body’s resolutions by further entrenching its occupation of an internationally recognized disputed territory – Jammu and Kashmir.

“A self-professed largest democracy in the world, it has violated every tenet of international humanitarian and human rights laws; by locking down 8 million people, shutting all means of communication and rejecting calls for independent investigations

into its industrial scale abuses in occupied Jammu and Kashmir,” he said.

“Masquerading as a ‘victim’ of terrorism, the racial superiority-inspired BJP regime has unleashed the most brutal state-directed terrorism on Kashmiri youth, women and civilians,” the Pakistani envoy said, adding it also financed, abetted, facilitated and directed state-sponsored acts of terrorism against its neighbours.

“To camouflage this reign of terror, it has launched the world’s most notorious disinformation campaign.”

He regretted that lack of global accountability has enabled India to defy international law, norms and rules. “Unabated and generous provision of conventional, non-conventional and sensitive technologies has imbued this regime with unparalleled sense of impunity to perpetuate occupation and foment terrorism.”

“Failure to do so entails risks to regional peace and security in South Asia and beyond,” he said, adding, “This Conference cannot remain oblivious to these clear and present dangers.”

The international bodies, mandated to maintain international peace and security and to control arms, have a responsibility to halt and reverse the damage done during the past few years to the rules-based global order as well as the arms control agenda, the Pakistani envoy said.

He called for the revival of global consensus, based faithful and demonstrable adherence to international law, to deal with these challenges.

Only through equity, non-discrimination, restraint and recognition of legitimate interests of all states, can the CD and other constituents of the disarmament machinery achieve meaningful outcomes, Ambassador Hashmi said.

Ambassador Hashmi reaffirmed Pakistan’s firm commitment to the goal of a nuclear weapons free world that is achieved in a universal, verifiable and non-discriminatory manner.

Pakistan also support the immediate start of negotiations in the CD to conclude treaties on Negative Security Assurances (NSAs) and the Prevention of an Arms Race in Outer Space (PAROS).

“The global build-up of advanced weapons, platforms and means of delivery, together with rising tensions, highlights the urgency of dealing with nuclear risks and dangers,” the Pakistani envoy said. “This makes work on the agenda item ‘Prevention of Nuclear War’ a high area of priority for this Conference.”