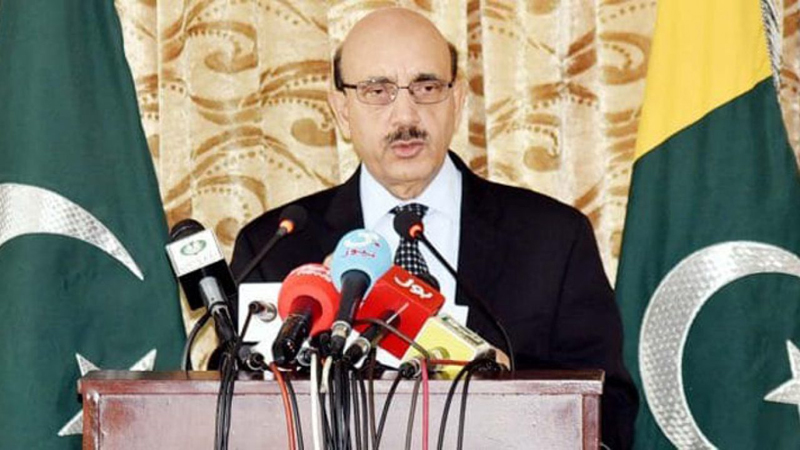 Kashmir issue can effectively be projected at global level through parliamentary diplomacy and the incumbent parliament of Pakistan can play an important role in this regard.

This was stated by the Azad Jammu and Kashmir (AJK) President Sardar Masood Khan during a meeting with Speaker National Assembly Asad Qaisar. Chairman Parliamentary Kashmir Committee Sheharyar Afridi was also present on the occasion.

The state president thanked the speaker for expressing solidarity by Pakistani parliament with the Kashmiri people on various occasions, and highlighting the situation of occupied Jammu and Kashmir at different parliamentary forums of the world.

He maintained that the Kashmir issue has been standing unresolved at the agenda of the United Nations’ Security Council for the last 72 years. The international community should look towards its resolution in accordance with the aspirations of the Kashmiri people, besides playing a role to end state-sponsored terrorism in Indian Illegally Occupied Kashmir.

He said in the past seven decades, not only hundreds of thousands of human lives had been lost in occupied Jammu and Kashmir because of non-solution of this issue but it had also put peace and security of the whole of South Asia at peril. Therefore, it is the basic responsibility of the UN Security Council and the international community to play their role in resolving the Kashmir issue in line with the UN resolutions and the wishes of the Kashmir people.

The state president said that the recent debate on Kashmir issue in the UK House of Commons and voices rising in the European Parliament and the US Congress in favour of the Kashmiri people, establish the fact that the results of our efforts and the efforts of Pakistani parliament and the government have started bearing fruits.

Expressing grave concern over shifting of 21 Kashmiri political prisoners by the Indian regime to the special cell of the high-security Agra prison, the AJK president said that there may be some conspiracy behind this shifting. The Indian government after abolishing the special status of Kashmir in August 2019, had arrested these prisoners under the notorious Public Safety Act, and had detained them in a prison in Uttar Pradesh for the last 16 months.

Speaking on the occasion, Asad Qaisar asserted that the people and the government of Pakistan strongly condemn the Indian brutalities being perpetrated in occupied Jammu and Kashmir, and they reiterate their pledge to support the struggle of Kashmiri people till the final resolution of Kashmir conflict.

He called upon the international community to take immediate notice of the situation of Jammu and Kashmir, and play its concrete role in securing an end to the human rights violations in occupied Kashmir. He maintained that the Pakistani parliament sided with the Kashmiri people in their legitimate and just struggle for the realization of their right to self-determination, and assured that the voice of Kashmir people would be raised in every parliamentary forum of the world in future also.