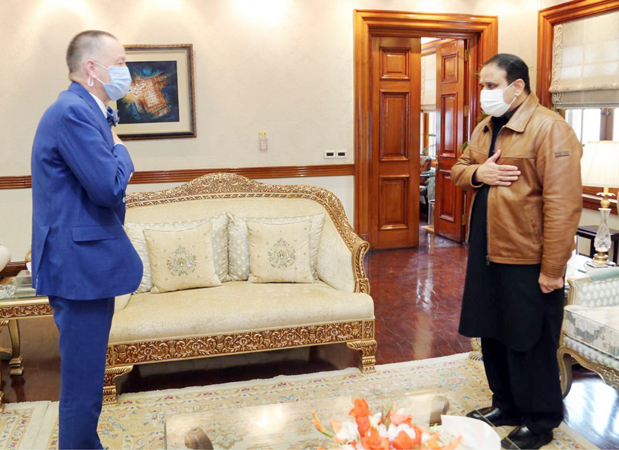 The opposition is engaged in a futile exercise of staging agitations as the government is not facing any threat from the PDM, which is already facing internal chaos, Punjab Chief Minister Sardar Usman said in a statement on Friday.

The CM regretted that these elements are trying to fulfil the enemy’s agenda by creating a state of anarchy in the country. Those who try to weaken the national interest cannot be the leaders, he declared.

He condemned the opposition’s drive to divide the nation and maintained that it is unconscious about its duties towards the public as well as the country. These elements are putting the national interest at stake for the sake of gaining some political mileage, he regretted. There is no room for negative politics and the perpetrators of negativity should realize facts because the nation needs unity and brotherhood, concluded the CM.

Meanwhile, Federal Minister for Narcotics Control Brig. (R) Ijaz Shah called on Chief Minister Punjab Sardar Usman Buzdar at his office on Friday and discussed matters of mutual interests. Both agreed to adopt collective measures to overcome the menace of the drugs trade and further decided that the federal, as well as the Punjab governments, will launch a joint crackdown against drug peddlers.

The CM emphasised that the elements involved in narcotics trade will be strictly curbed and assured that the police, excise and other departments will provide every assistance to the anti narcotics force. The drug traffickers are the enemy of the whole humanity and indiscriminate crackdown will be continued against them, the CM affirmed. Jail is the best place for those selling drugs outside educational institutions and action will be continued against them, he further said. Every segment of society should play its role in the war against narcotics because the country is facing many challenges and some elements are targeting institutions under a specific agenda. The propaganda against institutions is regrettable and the PTI government will continue to side with the national institutions, the CM reiterated.

Ijaz Shah stated that the elements involved in the business of narcotics do not deserve any leniency and added that they will be brought under the net of the law in collaboration with the Punjab government. Joint action will be initiated against drug peddlers, he said and asserted that there is no logic in the institution’s bashing. The opposition’s specific agenda of maligning the institutions has been fully exposed as the opposition parties are bent upon besmirching the country with their anti-state narrative, he further said.

Also, German Ambassador Bernhard Stephan Schlagheck called on Chief Minister Punjab Sardar Usman Buzdar at his office on Friday and discussed different matters including the expansion of bilateral cooperation between Germany and Punjab.

Talking on the occasion, CM Usman Buzdar stated that solid steps will be taken to further promote relations as Germany is the best partner of Pakistan. The government will take advantage of German expertise to develop the automobile industry, IT, health and social sector on modern lines. Punjab will take a lead for promotion of cooperation in different sectors as different facilities are provided to the investors under one roof, he added.

The CM asked the German investors to take benefit of tremendous investment opportunities as special incentives were being provided for foreign investment. All the necessary facilities are provided under one roof in special economic zones being established in different districts, he added. Similarly, the CM further said the construction sector has a lot of potential and five cement factories have been issued NOCs while 12 more NOCs will be issued soon.

The chief minister emphasised that development of less developed areas has been focused and a special package has been given for backward areas of south Punjab. The establishment of the south Punjab secretariat is an important initiative as the development process has been brought to the doorstep of the common man. On the other side, the CM pointed out that the government is fully focused on the development of the agriculture sector and the latest technology will be utilised for enhancing cotton production. The government is working on developing new cottonseed and agricultural credit card scheme is in the offing for farmers. Every citizen will be given health coverage and this program will be completed in the current year, he added. The PTI government has given priority to improving good governance, service delivery and development of backward areas and the development journey is continuous despite impediments, he added.

The German ambassador said he is happy to visit Punjab and appreciated the CM’s vision for the development of backward areas. German investment companies are interested to invest in different sectors in Punjab and cooperation will be further expanded, he added. Chairman P&D, CEO PBIT and others were also present.