* Interior minister says performance of NADRA, FIA and airports will be improved 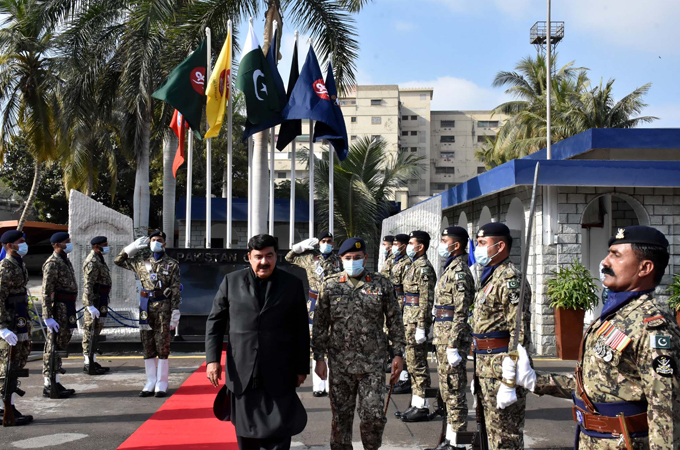 Minister of Interior Sheikh Rasheed Ahmad on Friday said that Prime Minister Imran Khan would complete his five-year constitutional term in the office.

He observed that the Broadsheet issue would be Panama-2 of Pakistan in upcoming two to three months. He stated this while addressing a press conference at a local hotel.

Sheikh Rasheed said that $100 millions property of the Pakistan Muslim League-Nawaz (PML-N) could come up from the Broadsheet.

The minister said that the Pakistan Democratic Movement (PDM) did not have words to say and the real issue was the Broadsheet. He said that the people had known the reality of PDM and its motives which was apparent from the protest of the PDM in front of the Election Commission of Pakistan.

He further said that they (PDM) were protesting and Pakistan People’s Party (PPP) Chairman Bilawal was enjoying celebrations at Umerket. Sheikh Rasheed Ahmad said that if they were waiting for Justice (r) Qayyum instead ofJustice (r) Shaikh Azmat then they were on mistake.

The minister said that the welfare of Karachi was objective of everyone and hoped that the Sindh government would come forward to install 10,000 CCTV cameras in the metropolis for ensuring it and making it a safe city.

He said that National Database and Registration Authority (NADRA), Federal Investigate Agency (FIA) and airports’ performance would be improved.

Replying to a question, he was of the view that international powerful elements were trying to harm Pakistan and China-Pakistan Economic Corridor (CPEC). He further said that anti-Pakistan elements did not want to see peace in the country.

Replying to another question, he said that 88-90 percent fencing had completed on Pak-Afghan border and 30-40 percent on Pak-Iran boarder as well while remaining fencing would be completed by the end of the current year.

He also appreciated Pakistan Army, Inter-Services Intelligence (ISI), Rangers and other law enforcement agencies performance for their effors in improving law and order situation in the country.

Answering a question regarding the United States of America’s new administration under President Joe Biden , he said that it seemed to be better for the Muslim countries.

Sheikh Rasheed, replying to a question on oil smuggling, he said that he had directed Pakistan Rangers, Coast Guards, and other organizations to check and control the smuggling of oil.

Replying on the relations of Police and Rangers, he said that these were two-wheels of a vehicle and they enjoy good relations.

Meanwhile, Punjab Minister for Literacy and Non-formal Education Raja Rashid Hafeez has said the transgender community has also been included in adult literacy drive to make them a useful organ of the society.

He stated this on Friday while presiding over a departmental meeting to review progress on literacy drive and the facility of co-curricular activities in non-formal schools.

While expressing the satisfaction that resources have been provided to achieve 100 per cent literacy, Rashid Hafeez said that the department is working hard to materialize the efforts of promoting education in society.

In this regard, a composite literacy policy has been chalked out and the prisoners are also rehabilitated, along with the provision of education, so that they may become a useful citizen of the society after their release, he added.

The Minister Literacy and Non-formal Education asked the officers to work hard for overcoming the shadows of the illiteracy in the society and to achieve the departmental targets. The incumbent government has fully activated the literacy department so that every citizen could be educated, he added.