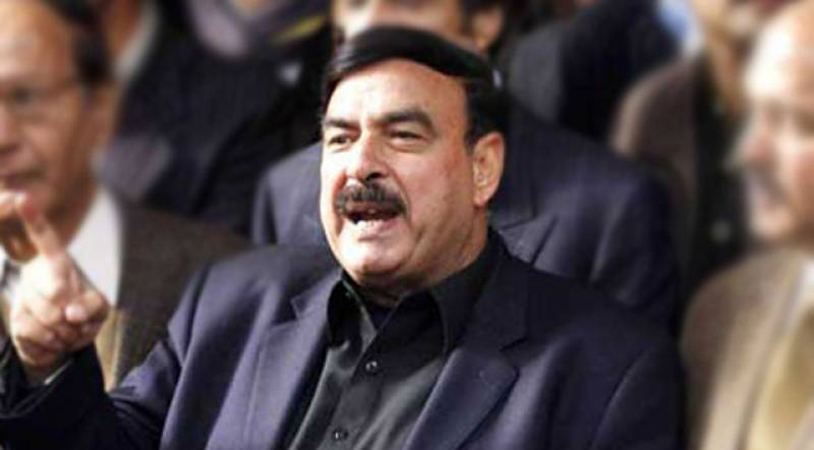 Minister of Interior Sheikh Rasheed Ahmad on Thursday said that government wanted to make the whole Karachi a safe city by installing CCTV cameras and hoped that the Sindh government would provide funds for it to resolve the issue of security permanently as the provincial government had funds.

He stated this on the occasion of his visit to the National Database and Registration Authority (NADRA)’s Mega Centre.

Sheikh Rasheed said that the Rangers had also a history like Pakistan Army and it was performing well in the city. He said that Rangers had ensured peace in the metropolis.

He announced on the occasion that 100,000 people would be issued new Computerized National Identity Card (CNIC) free of charge on a daily basis. He further said that all tehsils headquarters would have NADRA centres in order to facilitate the people.

He said, moreover, they were trying to bring 300 NADRA vehicles on roads as the people could get the CNIC at their doorsteps. He said that only Pakistanis would be issued CNICs and category of Afghanis had been changed and put on another side of the list. Sheikh Rasheed said that on the directives of the Prime Minister, a summary had also been sent to the Finance Department for increasing the tenure of passports duration from five years to ten years to facilitate the people.

He further said that they were also going to introduce e-passports to meet the international standards. The Minister said that facilities at airports would also be increased. Replying to a question, he said that foreign funding case would become important and would be Panama-2.

Answering another question regarding NAB probe against Sindh Chief Minister Syed Murad Ali Shah, he said that NAB did not come under his jurisdiction.

Replying to a question about the Pakistan Democratic Movement (PDM), he said that first time on the special directives of the Prime Minister the opposition was allowed to protest in the red zone and they also cooperated with the government.

He said that Maulana Fazalur Rehman would be the PDM leader who would be more in loss. He further said that if Maulana had invited him in the protest against Israel he would had come to participant in it. About MQM-Pakistan, he said that he had good relations with MQM-Pakistan and would visit them next time.

They discussed overall law and order situation in Sindh province specially in the metropolis and other issues of mutual interests, according to a statement.

Imran Ismail on the occasion said that lights of the city had restored because of the better law and order situation.

Interior Minister Sheikh Rasheed said that Pakistan Army had an important role in maintaining law and order situation in the country.

Also, Sheikh Rasheed Ahmed predicted that JUI-F supremo Maulana Fazlur Rehman will be ditched by the other opposition parties and he will be the biggest political loser amid all of the PDM rallies.

He also predicted that the political parties’ foreign funding case is very important and it has the potential to become ‘Panama-II’. He said more properties of Maulana Fazlur Rehman are going to be unearthed.

“We took such a big risk which is unprecedented in the history of Pakistan on the instructions of Prime Minister Imran Khan and allowed entry into the Red Zone of the opposition’s protest rally which they staged in front of the Election Commission of Pakistan,” he said while addressing a news conference in Karachi.

Sheikh Rasheed accepted that PDM opposition parties cooperated and timely concluded the protest and if such cooperation would be extended during their long march then the government would also do the same.

“Maulana Sahib’s affairs are going to take an ugly plunge as he will get nothing out of all this,” the federal minister said.

He also announced plans to make Karachi a safe city with an installation of security cameras that will likely be funded by the Sindh government.

Earlier in the day, the interior minister visited Rangers Headquarters where he was received by Director General Rangers Major General Iftikhar Hassan Chaudhry.

The Rangers DG briefed the minister on the operational readiness of the paramilitary force. Sheikh Rasheed appreciated the performance of the Rangers in maintaining peace in the province. He also laid floral wreath at the memorial of martyrs.