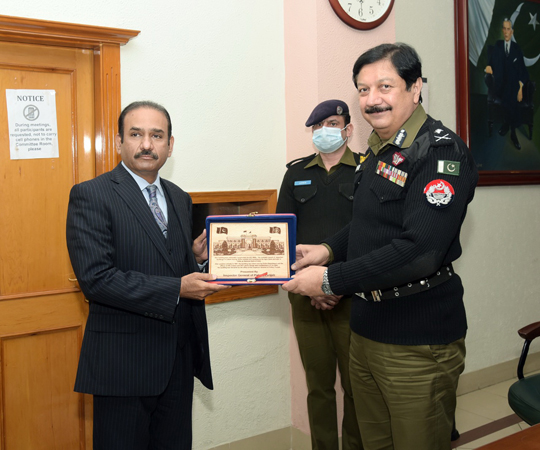 Punjab Police Inspector General Inam Ghani on Thursday said that Muhammad Tahir Rai and Dr Masood Saleem are highly professional, capable and hardworking officers of the Pakistan Police Service who have fulfilled every responsibility assigned by the department with utmost diligence, honesty and duty.

He further said that Muhammad Tahir Rai has a key role to play in strengthening the Counter Terrorism Department (CTD) as an institution and thanks to his excellent leadership and tireless work, terrorism has been eradicated from Punjab province. “The elements and their facilitators had to flee, and significant successes were achieved in minimizing the graph of terrorism, sectarianism and extremism.”

Mohammad Tahir Rai and Dr. Masood Saleem thanked IG Punjab and other officers for organizing the ceremony in their honour. Mohammad Tahir Rai said that the appointment of IG Balochistan by the government is no less than an honour for me and I will use all my abilities to protect all the citizens and nationalities of Balochistan and maintain the atmosphere of law and order. He further said that after a long service in the Punjab Police, “I am thankful to God for appointing Balochistan Police chief. While the equal respect of all citizens, officers and subordinates and treating them with good manners is the secret of my success”. He especially thanked Additional IG Rao Sardar, SSP Jawad Qamar and other team members for their support and cooperation and said that my first wish is to attain the status of martyrdom while ensuring protection of life and property of God’s creatures.

DIG Crimes Dr Masood Saleem thanked all the officers including IG Punjab and said that I tried my best to perform my service with utmost diligence, honesty and conscientiousness. He further said that he was very grateful to all the officers for their full support and cooperation which enabled him to perform his professional duties to the best of his ability. At the end of the ceremony, IG Punjab also gave souvenirs to the newly appointed IG Balochistan Muhammad Tahir Rai and Dr. Masood Saleem. All Additional IGs, DIGs and other officers including CCPO Lahore were also present on the occasion.