* Half of the amount to be used for roads’ repair work, Rs 500 million to be spent on improving water supply and sewerage system 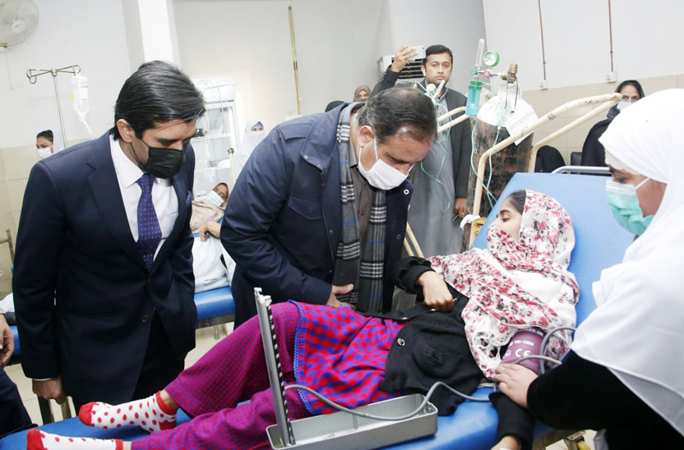 Half of the amount will be used for roads repair while Rs 500 million will be used for water supply and sewerage improvement. Similarly, Rs 500 million will be spent on construction of overhead bridge/underpass at railway crossings, he said. The CM further announced to develop 2000 villages, including that of Sahiwal, as model villages, and said that Sahiwal teaching hospital will be made functional soon. Cardiology institute will be constructed in Sahiwal and expressway will be constructed for Sahiwal from Samundri Interchange to facilitate different districts, he announced.

The CM affirmed that a programme has been devised to give universal health coverage to every citizen adding that Sahiwal and DG khan division are included in the first phase as PM Imran Khan will soon launch this programme in Sahiwal. Similarly, the wastewater treatment plant will be inaugurated in Sahiwal soon, he held. 10000 policemen were being recruited along with the provision of 650 new vehicles, he said.

The CM emphasized that the government has no problem or threat from the opposition and advised it to shun doing anything against national interest. We will continue moving forward side by side as I and Ch. Sarwar is striving to improve Punjab under PM Imran Khan, he said. After recovery, I visited Sahiwal and Harappa, he added. An 18 billion rupees development package has been announced for Sahiwal through Punjab intermediate cities improvement investment programme and development work will be done. No area will be deprived of the fruits of development as development is the right of every citizen which will be given to every city, he added.

Governor Ch. Sarwar in his address stated that the government wants to introduce a judicious system of justice and development on the pattern of the city-state of Madina. He thanked the CM for construction of Harappa road and vowed to develop Harappa. The development journey will be continued while the opposition may act according to its sweet will, he added. PTI will not allow anybody to interrupt the journey of development and public problems will be solved in collaboration with CM Usman Buzdar, he said. Advisor Asif Mahmood said that tourists van project will be started soon and the family site will be developed as well. Former MNA Rai Hassan Nawaz thanked the CM for taking interest in the development of Harappa and Chichawatni.

Earlier, CM Usman Buzdar and Governor Ch. Sarwar was giving a briefing about Harappa Museum in which they were told that 5000 antiquities, out of 25000 items, have been put on display. Both also visited different sections of the museum. The CM asserted that the protection of Harappa antiquities will be ensured and a new exhibition gallery will be constructed along with the completion of the ongoing auditorium project which will be completed with the cost of 5.25 crore. The government will protect the historical heritage as Rs 1 billion worth local government funds will be provided for Harappa and NA-148, he added.

Governor Ch. Sarwar assured to take every step for the promotion of tourism along with a solution of local problems on a priority basis.

The CM took a round of THQ hospital during Chichawatni visit to take stock of the situation. He gave his mobile number to a child patient for contact in case of any difficulty. He announced to upgrade the hospital with the cost of 30.5 crore rupees to provide a trauma centre along with up-gradation of emergency services and provision of allied faculties.

The CM Usman Buzdar announced a 2 billion worth development package for Chichawatni while addressing a gathering of notables at the residence of PTI leader Rai Hassan Nawaz. Local government schemes will be completed with the cost of 41 crores, 15 crore rupees will be spent on the expansion of rural roads and 10 crore rupees will be spent on community development programmes, he announced.