Moot lambasts illegal relocation of population by India in IIOJK 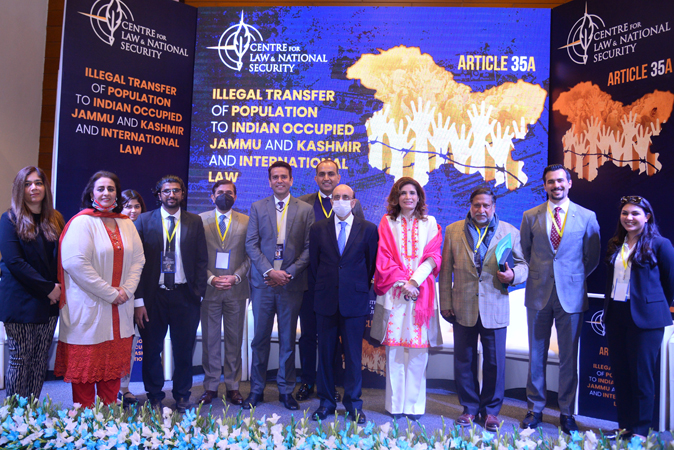 The panel discussion focused on India’s violation of international law. The discussion served as the basis for providing concrete recommendations with respect to way forward for Pakistan regarding the Kashmir dispute.

Dr Moeed Yusuf, Special Assistant to the Prime Minister and National Security Advisor, sent a video message, in which told the audience that all international media outlets have called out India on these blatant violations of international law and we need to look for legal solutions as well. He said government will welcome any suggestions on the issue from experts to stop illegal transfer of population taking place in Indian Occupied Jammu and Kashmir.

Eminent international law expert Mr. Ahmer Bilal Sufi added there is a legal potential we must explore and resolve Kashmir issue as a nation.

During the discussion lawyer Jamal Aziz stressed on the effects we see today is due to lack of academic engagement, he also underlined the role as an individual and how can contribute privately saying, ” We need to establish a correct legal narrative and focus on short term options e.g., boycott sanction movement etc.”. To sum it up the main factors Jamal consider is important currently are advocacy, engagement, legal advisory and scholarship. Addressing Kashmir issue Justice Ali Nawaz talked about going to ICJ to addressing this issue and getting it resolved. Member National Assembly and Parliamentary Secretary for Ministry of Foreign Affairs Ms Andleeb Abbass added that discussion should primarily focus on 3 main factors Indian Hypocrisy, Legal atrocities, and Human Rights. Maj. Gen. (Retd) Muhammad Samriz Salik talked about how we have reached a better position than we were before.

In his closing remarks, President Sardar Masood Khan complimented Chaudhry Faisal Mushtaq Chairman Advisory Board CLNS and Rehman Azhar Executive Director CLNS on initiating Centre for Law and National Security along with TMUC leadership, staff and panelists for offering a discussion that was cerebral, relevant, and substantive. He also emphasized on the engagement through legal and academic entities. These conversations help the youth to broaden their perspective and horizon about nation security and the Kashmir issue. He appreciated the idea of initiating such conventions that help sensitize the Millennials to cultivate their approach and perspective towards foreign policies and nation security. He greatly emphasized and appreciated on the efforts of the think tank and Chaudhry Faisal Mushtaq on empowering this idea. He also inaugurated the new office of Center for Law and National Security.