PDM stands exposed, no place for politics of agitation: Buzdar 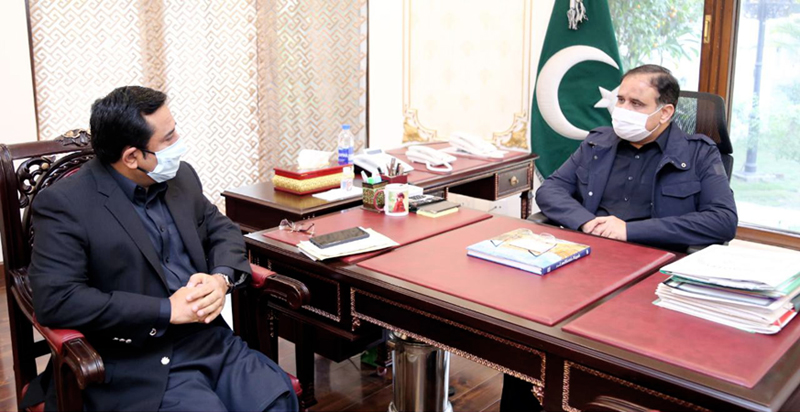 Punjab Chief Minister Sardar Usman Buzdar has said the PDM has been badly exposed before the people.

In a statement, the CM said the untimely agitational drive of the opposition is an exercise in futility. The agitators striving to obstruct the development process have been badly exposed. Now, these elements will continue to bewail while Pakistan will move forward under the strong leadership of PM Imran Khan, he said. There is no room for agitational politics and the narrative of the rejected elements has been rejected by the people. In fact, the agitational politics has failed before the politics of public service of the PTI-led government, concluded the CM.

Meanwhile, Amir Talal Gopang MNA and Syed Muhammad Sibtain Raza MPA met with Chief Minister Punjab Sardar Usman Buzdar at his office on Tuesday and apprised him about the problems of their constituencies.

The CM assured to early solve their problems and reiterated that the journey of composite development and prosperity will be spread to backward localities. The government has followed a policy of composite development and required resources are provided to backward cities. Earlier, funds were provided to some specific cities, he stated. He regretted that opposition obfuscated the people by raising hollow slogans and false claims. Those engaged in negative politics should realise facts as PDM has compounded the difficulties of the people, he added. Usman Buzdar maintained the opposition is undermining national interest for safeguarding some personal stakes. On the other side, public service is the main agenda of the PTI and the government will work hard to provide various facilities to the citizens, he said.

Also, Usman Buzdar chaired a marathon meeting of provincial ministers, parliamentarians and ticket-holders at commissioner’s office Sahiwal on Tuesday to deliberate upon the development plans. Addressing the meeting, the CM maintained the agenda of opposition parties is contrary to national interests and those involved in the politics of anarchy are, in fact, fulfilling the enemy’s agenda. The PDM has no concern for the public and the rejected elements are only deceiving each other as PDM’s negative politics has been defeated. The PTI government will complete its constitutional tenure and no one will be allowed to block the journey of development, he asserted and further stated that development plans will be devised with mutual consultations and timely implementation will also be ensured. It is also important to maintain the best coordination between assembly members and administration, he added. The purpose of field visits is consultations with assembly members and I will, personally, review every matter, including the development process, during visits, assured Usman Buzdar. After Lahore, Chakwal and Rajanpur, development plans of other districts are also in process, he said. He affirmed that the DHQ hospital’s 128-bedded cardiology block will be completed with an amount of 5.5 billion rupees to provide modern facilities to the patients. He directed to early complete the teaching hospital and further directed to excogitate the establishment of cardiology institute in Sahiwal. The CM disclosed that a proposal of linking Sahiwal with motorway was being reviewed and expansion project of Chichawatni, Kamalia-Rajana road was also under consideration. The industrial estate project will also be started in Chichawatni, he assured. The participants thanked the CM for giving priority to Sahiwal and presented proposals for the solution of public problems. Rai Murtaza Iqbal MNA, provincial ministers Nauman Langrial, Sumsam Bukhari, Rai Hassan Nawaz, VC OPC Punjab Waseem Akhter, PTI’s office-bearers and ticket-holders, commissioner, RPO and secretary health attended the meeting.

The political antics of the PDM leadership are a slap on their faces as the opposition has no other issue to play with. This was stated by Special Assistant to CM on Information Dr Firdous Ashiq Awan in a statement issued on Tuesday. While criticising the ludicrous political approach of the opposition towards national politics, the SACM maintained the opposition parties’ hocus-pocus has resulted in their loss of face. They will not get anything except humiliation, she repeated. Meanwhile, PDM is also facing internal chaos as the crown prince has parted ways and the princess will soon leave Maulana in the lurch. Those who had threatened to tender resignations and holding of the long march are, even, more cowardly than the proverbial jackals, concluded the SACM.