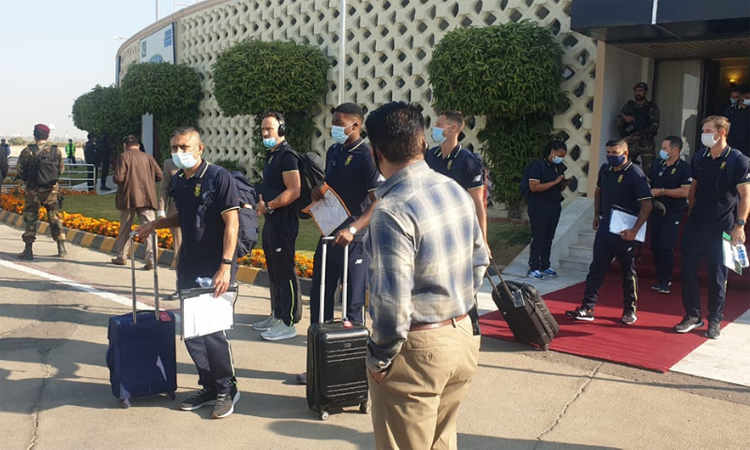 KARACHI: The South African cricket team arrived in Karachi on Saturday to play two Tests and three Twenty20 internationals on their first tour of Pakistan in 14 years. The team, led by wicketkeeper-batsman Quinton de Kock, was whisked from the airport under state-head level security accorded by the hosts, the Pakistan Cricket Board. The 21-member squad had two Covid-19 tests before their departure from Johannesburg which all came back negative, and they will be further tested on their arrival. Officials say the squad will stay in individual isolation until the results of the first round of testing are released before they start training in a ground adjacent to their hotel.

After the end of the quarantine period, the team will start practice training at Karachi’s National Stadium, according to the Pakistan Cricket Board (PCB). Pakistan and South Africa will play the first Test in Karachi from January 26. The second Test starts in Rawalpindi from February 4 while Lahore will host all three Twenty20 internationals on February 11, 13 and 14.

South Africa’s head coach Mark Boucher has showed satisfaction with the security arrangements in Pakistan. “We’ve had our [security] guys go there [to Pakistan] and do a recce of the situation and they have said it is safe,” Boucher told reporters ahead of the team’s departure on Friday. “So from my side there are no issues, we have to get back there and start playing cricket,” said Boucher, part of South Africa’s last tour to Pakistan in 2007. International cricket was suspended in Pakistan following a terrorist attack on the Sri Lankan team bus in Lahore in March 2009. Pakistan has gradually hosted teams again in the last five years before Test cricket was revived in late 2019 when Sri Lanka toured for two Tests.