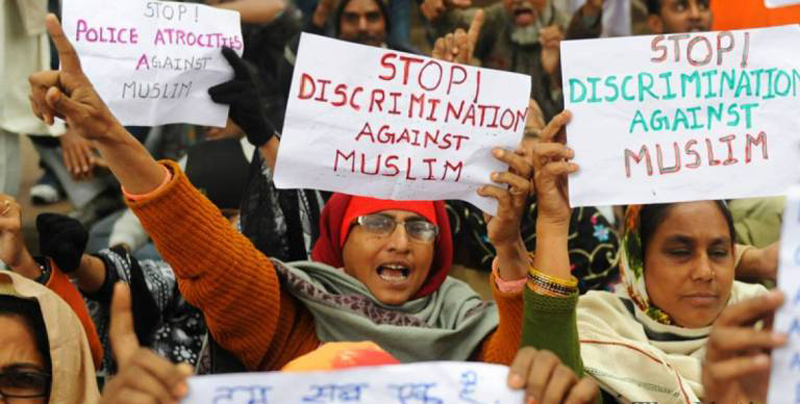 This concern was expressed by the British parliamentarians in a debate secured by MP Jim Shannon at the Westminster Hall, terming as “most worrying and disturbing” the situation in India with regard to minorities, particularly Muslims, Christians and other ethnic groups.

MP Jim Shannon said despite Indian Prime Minister Narendra Modi’s pledge to commit to “complete freedom of faith” since his election in 2014, there had been a significant increase in anti-minority rhetoric.

He quoted IndiaSpend’s analysis of Indian Home Ministry data, showing a 28 percent rise in communal violence between 2014 and 2017, with 822 “incidents” being reported in 2017, which resulted in the deaths of 111 people and wounding of 2,384 people.

A recent Pew Research Center report, he said, revealed that India had the highest level of “social hostility and violence based on religion or belief of any country in the world”.

He mentioned that COVID-19 pandemic had further exacerbated problems as Muslims were accused of “deliberately spreading the virus” and labelled as “bio-terrorists” and “corona-jihadists”.

Similarly on 25 November 2020, he said, an estimated 100 Christians from Singavaram village in India’s Chhattisgarh state were attacked as the mob burnt their Bibles and accused their victims of destroying the local culture by following a foreign religion.

He hoped to meet the Indian High Commissioner next week on the issue of persecution of minority group in India.

He mentioned that 80 year-old Father Stan Swamy, an advocate for the rights of the poor and marginalised in India for 50 years, has been unjustly held captive by the National Investigation Agency of India for alleged Maoist links.

Jim Shannon expressed anger at the spread of anti-conversion laws in India, restricting the freedom of individuals to freely convert and deny their right to freedom of religion or belief.

According to the US Commission on International Freedom of Religion or Belief, the Indian authorities predominantly arrest Muslims and Christians for conversion activities, whereas mass conversions to Hinduism often take place without any interference from the authorities.

“They have double standards, powered by the anti-conversion laws and often with the police’s complicity, right-wing groups conduct campaigns of harassment, social exclusion and violence against Christians, Muslims and other religious minorities across the whole country,” he said.

MP Sir Edward Leigh (Gainsborough) said the Indian government had undoubtedly set an anti-Christian and anti-Muslim tone with a fact that violent intimidation at street level did the most harm.

Bishop Gerald Almeida of Jabalpur said, “It is a cause of concern with the Church because Christians are being killed and beaten…There are much more attacks than ten years ago. Fundamentalism is a real problem.”

He said the Indian government’s own figures, released in 2018, showed an upward trend in inter-religious violence and posed a question if the tone was being set by the government themselves?

Almeida mentioned that riots in north-east Delhi last year resulted in Muslim homes and businesses being destroyed; of the 53 dead from six days of violence, two thirds were Muslims-who had been shot, slashed or set on fire.

Naz Shah (Bradford West) quoted the words of India author and politician Shahi Tharoor who had said that, “It’s time the Modi government learned they cannot promote ‘Make in India’ abroad while condoning the propagation of ‘Hate in India’ at home.”

She said Narendra Modi was once barred from the US because of his alleged role in the 2002 Gujarat massacre, which saw more than 2,000 Muslims murdered and some newspapers giving him the title, “the butcher of Gujarat”. Today, he is invited on to red carpets across the globe, including in Britain, she regretted.

She said Modi was a life member of the Rashtriya Swayamsevak Sangh, which is inspired by the likes of Adolf Hitler and Mussolini and the ideas of an Aryan race.

Naz Shah said the world needed to make a choice between turning a blind eye to the Nazi-inspired ideology taking charge in the ruling party of India in favour of economic trade, or standing by persecuted minorities and the very values of Gandhism.

MP Stephen Timms (East Ham) said for last two years, India had been in 10th place on that list of the worst countries for the persecution of Christians, and the position was not going to improve.

He said government inaction meant that mob lynching against Muslims and Dalits and violence against Christians and humanists was increasing.

MP David Linden (Glasgow East) said analysis of instances since 2014 demonstrate that Hindu extremists had created an environment of hate and intolerance towards India’s religious minorities, primarily its Christian and Muslim communities.

“This in turn has led to an escalation of violence, social ostracism, property destruction, hate speech, disruption of peaceful non-Hindu religious activities, and false accusations of conversion activities,” he said.

Concluding the debate, UK’s Minister for Asia Nigel Adams said the UK was committed to defending freedom of religion or belief for all.

He mentioned that during the Foreign Secretary’s visit to India in December, he raised a number of human rights issues with his Indian counterpart, including the situation in Kashmir.