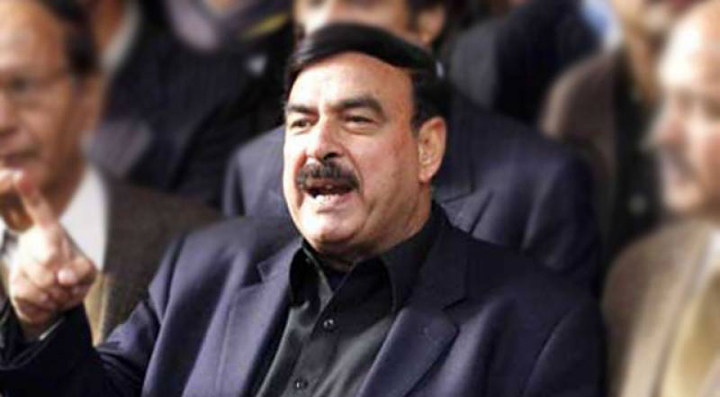 Interior Minister Sheikh Rashid Ahmed Friday said the government would not stop the Pakistan Democratic Movement (PDM) protest outside the Election Commission of Pakistan (ECP) on January 19 if they would abide by the law and Constitution.

He said that the opposition could practice their constitutional right, as the government would not create any hurdle in their way to protest. But the law would take its course if the opposition would try to create unrest in the Capital, he added.

Addressing a press conference at NADRA Offices here, he said that he had already predicted that the opposition members would never resign from the assemblies as they would participate in the Senate elections and by-polls, and they would also stage a march on Islamabad.

Sh Rashid Ahmed said that Prime Minister Imran Khan had formed a committee, headed by the the interior minister [himself], to hold talks with the opposition, adding that Maulana Fazlur Rehman should refrain from creating division and unrest in the country; otherwise, the government would have to take action.

The minister said that the Pakistan Tehreek-e-Insaf (PTI) government was not afraid of the PDM protest, but it was time to observe whether the opposition would respect the law and Constitution or not, adding that Pakistan People’s Party (PPP) was playing wisely for its political gains under the PDM umbrella.

He said that Prime Minister Imran Khan would not give any sort of deal to THE opposition as he was committed to holding accountable those who plundered the national exchequer. He said the policies of the previous corrupt governments caused inflation in the country.

To a question regarding Federal Investigation Agency (FIA), he said that comprehensive reforms would soon be brought in the Agency to further enhance its performance and minimise the mistakes. In this regard, a law would be introduced to show leniency towards those deportees who traveled abroad to earn their livelihood.

To another question, Sh Rashid Ahmed said that the PML-N leaders neither in Panama case nor in Broadsheet case gave any answers about their assets and money trail, but they were propagating to hide their lies and corruption.

The minister said that the opposition members would backtrack on their resignations when they would be asked about it by the speaker in personal hearing, adding that Prime Minister Imran Khan had directed him not to renew the passport of Nawaz Sharif, as leaders like him use the innocent people to achieve their personal goals.

Earlier, he said that instructions had been given to set up two more NADRA offices, while 100,000 free-of-cost identity cards would be issued to people. It was also planned to set up NADRA offices at Tehsil level, he said and added that visa issuance system had been made online to facilitate the Afghans and other aspirants.