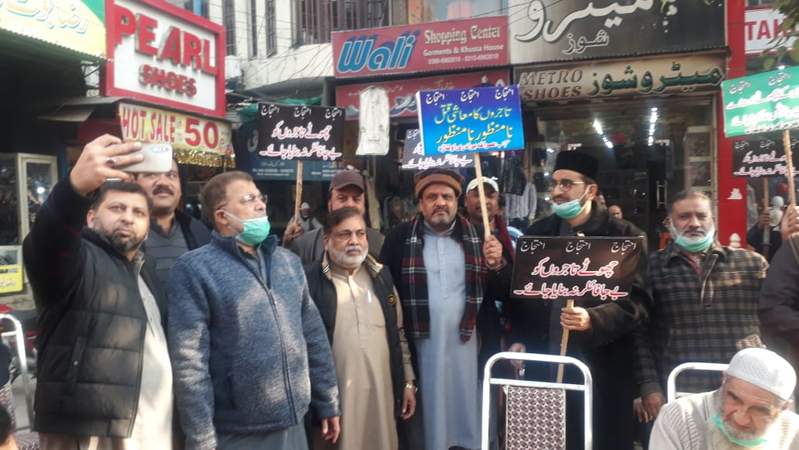 The traders of Okara district have rejected the imposition of sales tax and POS system introduced by the FBR, calling it an enemy of traders.

They also staged a protest against the imposition of sales tax in front of Okara Press Club. The rally started from Gol Chowk Okara and passed through various bazaars and reached in front of the press club where a large protest was staged. Wherever the rally went, local traders and citizens joined the rally. As a result of the protest, Tehsil Road Okara was closed to traffic and business life in the city was suspended.

Addressing the rally, the business community said that they do not accept the implementation of FBR sales tax. The traders rejected this oppressive tax and will never pay it. “The purpose of this tax is to economically massacre small traders. Economic situation is already deteriorating due to coronavirus and in these circumstances, an attempt is being made to bury the traders alive by imposing cruel sales tax. We will never allow this effort to succeed,” they said.

Members of the business community said that 40,000 notices were sent to them by the FBR, adding that installing a POS system would be a gross abuse. “If the FBR does not immediately reverse the decision to impose a sales tax, the business community will shut down not only the Okara city but the province as well,” they warned.

FBR officials in Okara said the implementation of sales tax in various sectors is very important for the economic development of the country. “Many benefits and businesses will be documented. Merchants who install POS systems will get benefits like ‘cashback’,” they said.