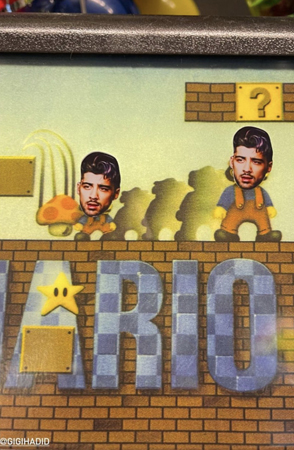 If there is one thing singer and songwriter Zayn Malik enjoys more than making great music, it’s video games. So, on his 28th birthday, his ladylove Gigi Hadid went all out to give him the perfect party for two in their New York apartment!

Complete with arcade games and videogame themed balloons, the party was planned months ahead by Gigi and her mom Yolanda Hadid, reported HollywoodLife. The supermodel shared pictures from the party on her Instagram stories, and even before that, paparazzi photos of the preparations started doing the rounds on Twitter, leaving fans excited.

From PacMan and The Simpsons to Donkey Kong and Teenage Mutant Ninja Turtles, Gigi made sure to have an array of video arcade games for her baby daddy. She even went all out with party hats that featured Zayn’s face all over them!

Another special touch was Gigi’s custom bouquet of flowers for Zayn Malik, arranged just like his upcoming album Nobody is Listening’s cover art!

From PacMan and The Simpsons to Donkey Kong and Teenage Mutant Ninja Turtles, Gigi made sure to have an array of video arcade games for her baby daddy. She even went all out with party hats that featured Zayn’s face all over them!

Gigi also took to Instagram to share a special birthday message for her beau. “Happiest birthday to our Zaddy baba. So special. Love you long time, thank you for making me a mamma to the best girl ever,” she wrote. Gigi and Zayn welcomed their daughter in September 2020.

According to HollywoodLife, the 25-year-old new mom put a lot of thought and effort into the celebration. “Gigi and Yolanda had been planning Zayn’s birthday for months because they really want to make his day special,” a source revealed.

“Yolanda and Zayn’s personal assistant, Taryn, were the ones doing all the heavy lifting so to speak, and running around town when Gigi was pregnant. Then Yolanda wanted to let Gigi just relax with Zayn and their baby while she and Taryn got everything prepared,” they added.

The source also shared, “Zayn has always loved video games and arcades, and it’s one of his and Gigi’s favorite places to spend a date night. They decided to go with this theme because it’s nostalgic and it will keep them entertained since they can’t have a lot of people over, due to the pandemic.”

Naturally, longtime fans of Zayn Malikwho know his love for videogames could hardly contain their happiness. “ZAYN DEFINITELY HAD THE BEST BIRTHDAY PARTY. I’M JEALOUS. ESPECIALLY BC I WANT ONE OF THOSE PARTY HATS,” wrote one user.

Others lauded Gigi for her efforts for throwing Zayn Malik such a ‘cool’ party. “The time it took to set up Zayn’s birthday party shows how important he is to Gigi,” one fan pointed out.

What do you think about Zayn Malik’s 28th birthday bash?