Trump takes no responsibility for riot 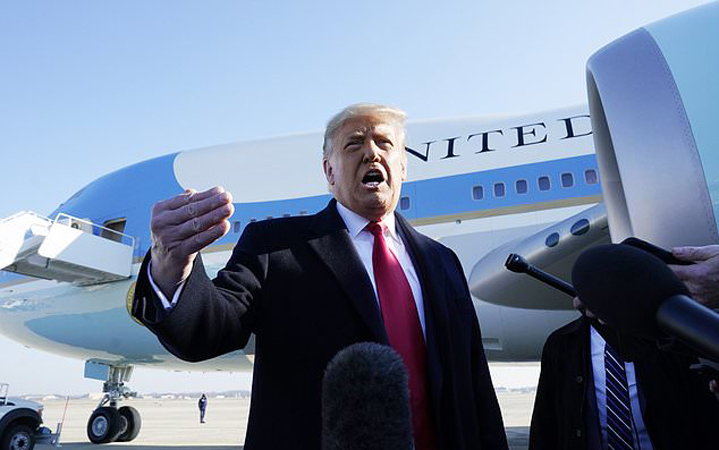 President Donald Trump on Tuesday took no responsibility for his part in fomenting a violent insurrection at the U.S. Capitol last week, despite his comments encouraging supporters to march on the Capitol and praise for them while they were still carrying out the assault.

“People thought that what I said was totally appropriate,” Trump said.

He made the comments during his first appearance in public since the Capitol siege, which came as lawmakers were tallying Electoral College votes affirming President-elect Joe Biden´s victory. Trump was heading to Texas on Tuesday to trumpet his campaign against illegal immigration in an attempt to burnish his legacy with eight days remaining in his term, as lawmakers in Congress appeared set to impeach him this week for the second time.

The rampage through the halls of Congress sent lawmakers of both parties and Trump’s own vice president into hiding, as crowds called for Mike Pence’s lynching for his role overseeing the vote count. The scene also undermined the hallmark of the republic – the peaceful transition of power. At least five people died, including one Capitol Police officer.

In the days leading up to the Jan. 6 certification vote, Trump encouraged his supporters to descend on Washington, D.C., promising a “wild” rally in support of his baseless claims of election fraud, despite his own administration´s findings to the contrary. Speaking for more than an hour to a crowd on the Ellipse, Trump encouraged supporters to “fight like hell” and suggested that Republican lawmakers would need “more courage not to step up” and overturn the will of voters to grant him another term in office. He also suggested he would join them in marching on the Capitol.

As Trump wrapped up, thousands of his supporters were already heading to the Capitol, where lawmakers convened to count the electoral votes. As rioters were still in the building and lawmakers sheltered in secure locations, Trump, at the urging of aides who were shocked by the violence, released a video seemingly excusing the events, saying of the rioters: “We love you. You´re very special. Go home.”

Speaking Tuesday, Trump said the “real problem” was not his rhetoric, but the rhetoric that Democrats used to describe Black Lives Matter protests and violence in Seattle and Portland this summer,

“Everybody to the `t´ thought it was totally appropriate,” Trump said of his own comments.

Trump was headed to Alamo, Texas, a city in the Rio Grande Valley near the U.S.-Mexican border – the site of the 450th mile of the border wall his administration is building.

Alamo is named after the San Antonio mission where a small group of Texan independence-fighters fended off Mexican forces during a 13-day siege. Most of them died, but the mission became a symbol of resistance for Texans, who eventually defeated the Mexican army.

Trump’s visit – no doubt a symbol of the president’s defiance – comes as he spends the final days of his presidency isolated, aggrieved and staring down the prospect of a second impeachment.

Aides have been urging the president to spend his remaining days in office highlighting what they see as the chief accomplishments of his presidency: a massive tax cut, his efforts to roll back federal regulations and the transformation of federal courts with the appointment of conservative judges. But Trump has repeatedly resisted their efforts as he has remained ensconced in the White House, behind closed doors, consumed by baseless allegations of voter fraud and conspiracies.

Trump is expected to deliver remarks highlighting his administration’s efforts to curb illegal immigration and the progress made on his signature 2016 campaign promise: building a “big, beautiful wall” across the length of the southern border – an imposing structure made of concrete and reinforced steel.