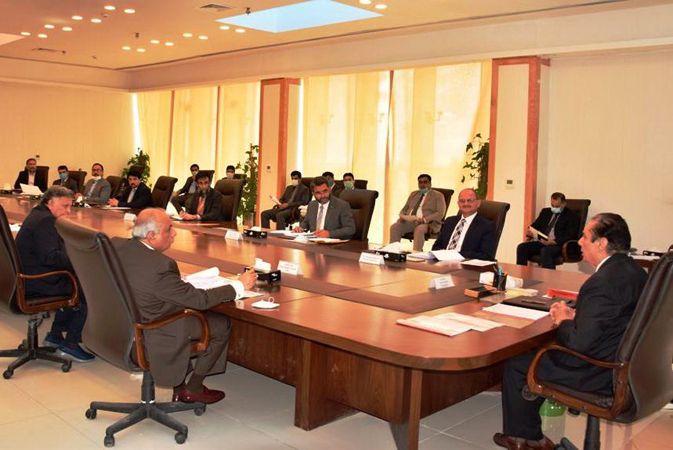 Honorable Mr. Justice Javed Iqbal, Chairman NAB chaired a meeting to review performance of NAB at NAB Headquarters. Mr. Hussain Asghar, Deputy Chairman NAB, Syed Asghar Haider, Prosecutor General Accountability, Zahir Shah, Director General operations attended the meeting whereas all DGs of regional bureaus attended the meeting via video link. The meeting reviewed the overall performance of NAB Headquarters and all regional bureaus especially under trial cases in respected courts and decided that effective oversight as well as further improving the standard and quality of complaint verifications, inquiries and investigations so that references will be filed on the basis of solid evidence as per law. Chairman NAB directed all regional bureaus to ensure that all complaint verifications, inquiries and investigations are being carried out on basis of solid evidence having statements of accused persons, witnesses and other relevant documentary evidence so that corrupt elements should be brought to justice as per law.

He said that hard work, commitment, dedication, professionalism and experience always prove helpful in conduct of investigations. NAB strongly believes in imparting and enhancing the capacity building of its investigation officers as training is an ongoing process in order to learn about new techniques, technology, scientific methods to enable them to meet modern day requirements of investigation as per law.

The meeting decided that functioning of NAB’s forensic Science laboratory should be reviewed so that the standard and quality of inquiries and investigations should be improved accordingly. Chairman NAB directed to utilise all available resources for concluding the mega corruption white collar cases on scientific basis so that all complaint verifications, inquiries and investigations should be completed within already prescribed timeframe as per SOP by utilizing all available resources on merit in a transparent way. Proper monitoring of the performance of NAB headquarters and all regional bureaus would be ensured on the directives of the chairman by ensuring persistent vigilance so that performance of regional bureaus will be further improved as per law. Chairman NAB directed all bureaus to ensure that the cases should be pursued in an effective way. More than 1230 references are under trial in different respected Accountability Courts of the country. NAB has recovered Rs. 714 billion rupees from corrupt elements directly and indirectly. NAB is making sincere efforts in eradication of corruption to make Pakistan corruption free.He said that NAB is a people friendly organization which always believes in respecting all the people visiting NAB and no laxity will be tolerated in this regard.