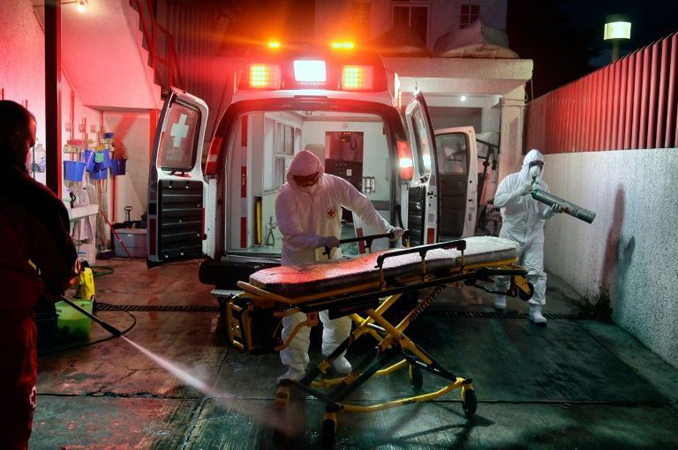 For paramedics dealing with a surge in coronavirus infections in Mexico, finding an available bed for patients in overwhelmed hospitals has become a daily lottery.

“For there to be room, one person has to be discharged or die. It’s tough but it’s the truth,” said Angel Zuniga, a Red Cross coordinator in the city of Toluca southwest of the capital. “One goes in and another comes out,” Zuniga added. In Mexico City and neighboring areas, 64 of 78 hospitals were in a “critical” state on Friday with beds available in only a handful of them, according to the authorities.

In the capital itself, home to nine million people, 86 percent of hospital beds were occupied. The problem is not confined to the public sector. Private clinics, where many coronavirus patients turn in the hope of finding a place, are also overcrowded. Some turn away patients unless they give a deposit of 170,000 pesos (about $8,400). “They say ‘take him away’ and we’ll go back to the street again,” looking for another hospital, Zuniga said.

Even when there is room for another patient, it sometimes takes hours before they are admitted. “It’s frustrating, but if we collapse, the healthcare system will collapse too. So, we always try to stay positive,” said Miguel Angel Moreno, a paramedic from Naucalpan near the capital.

“As humans, there’s obviously a point at which you become desperate.” On top of the emotional stress comes the physical toll and discomfort of having to wear a protective suit for hours. “Fatigue is always an issue,” said senior paramedic Ana Yesi Hernandez. “Sometimes it takes them three to four hours to find a spare bed in a hospital.”

The authorities acknowledge that the real figure is probably much higher due to limited testing. On Friday authorities scrapped plans to reopen non-essential activities in the capital.