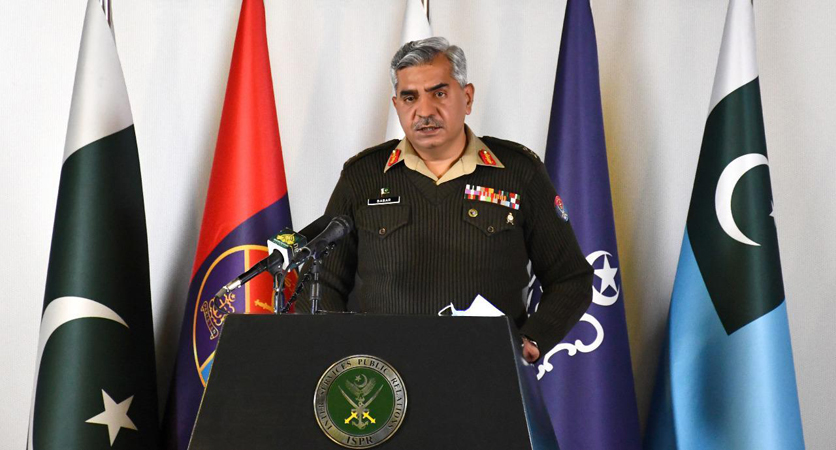 Inter-Services Public Relations (ISPR) Director General Major General Babar Iftikhar on Monday said the army is subservient to the government and it does not need to get involved in politics nor should it be dragged into it.

Addressing a media briefing, the DG ISPR said there has been no backdoor contact with the opposition parties as is being speculated in the media. “Absolutely not,” he said.

The DG ISPR said leaders of the Pakistan Democratic Movement (PDM) will be offered tea and snacks and looked after if they decide to stage a long march towards Rawalpindi. “I don’t see a reason for [them] coming to Pindi. And if at all they want to come, we will offer them refreshments (chai pani) and look after them. What more can I say?” he said to a question.

Maj Gen Iftikhar said that the criticism levelled by the opposition parties against the military is ‘baseless’ and that the government has given a suitable response to those statements. “The military is doing its job despite all that is being said about it,” he said. “Our concern [regarding the targeting of the armed forces] is separate.”

“The government of that time had asked the army to conduct the elections and the military followed their orders with honesty and to the best of its ability,” he said, clarifying that there had been no rigging in the 2018 elections. “Even if they [the opposition parties] have doubts about it [the result of the election], they can approach the respective institutions,” he suggested. “To level allegations is not right. The army is subservient to the government and the government has responded to these allegations in a better way,” he added. When asked if there would be any action taken against those smearing the army, the ISPR chief said the army is simply doing its job and will respond to criticism only when it is felt that is based on facts or holds some weight. “We our pre-occupied and do not want to get involved in such things nor will we. We have stayed the course [and] we will stay the course,” he said, adding that morale of the entire army and that of the families of the martyrs was very high.

Referring to rising political tensions in the country, Maj Gen Iftikhar said: “This is truly not a good thing […] but all said and done, the army is a subordinate institution of the government.”

Asked about Prime Minister Imran’s statement that the opposition was asking the army to overthrow his government, the DG ISPR declined to comment. But he said there was ‘absolutely no’ backdoor contact between the army and the opposition. “There is no such thing. We want to stay out of it and we are out of it,” he added.

The DG ISPR said the European Union Disinfo Lab revealed that India had employed the highest intensity propaganda against Pakistan during its 15-year long disinformation campaign. According to the Disinfo Lab report ‘Indian Chronicles’, the Indian fake media campaign was carried out by Shirvastav Group through false media outlets, non-governmental organisations (NGOs) and news outlets, he said.

Major General Babar said the EU Disinfo Lab had exposed undeniable evidence of Indian hand behind terror acts on the Pakistani soil. He said before dissecting the Indian disinformation campaign against Pakistan it was necessary to ascertain the course being followed by India and Pakistan.

He said, “Pakistan during the past 20 years has fought a successful war against terrorism and proved to be a responsible state. In over 1,200 operations, almost all terror outfits had been eliminated in the country, with killing of over 18,000 terrorists.” He said in the legal domain, adequate legislation was enacted in order to curb extremism and terrorism, besides coordinated action was launched against such organizations through a comprehensive strategy.

For international peace and security, he said, the security forces of Pakistan had either arrested or killed over 1,100 Al-Qaeda terrorists, besides sharing intelligence with more than 70 countries. Pakistan sacrificed more than 83,000 innocent lives in the fight against terrorism and bore $126 billion economic losses, he added.