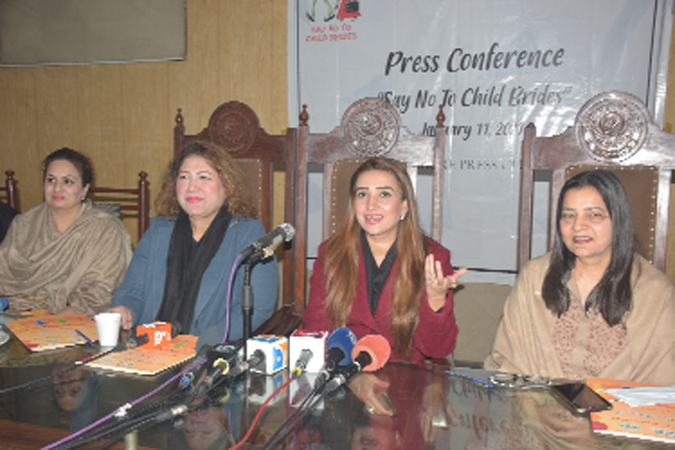 A number of parliamentarians from two major political parties and officials from the government departments resolved to increase the minimum age of marriage for girls in Punjab from 16 to 18 years and make National Identity Card a mandatory document as an evidence of age at the time of marriage. They also announced to support a relevant amendment act which is pending in the Punjab Assembly and waiting for the approval.

This was announced during a “Press Conference on Say No To Child Brides,” which was held at Lahore Press Club by Bargad a leading youth development organization. MPAs Sadia Sohail Rana, Sumaira Bukhari, BushraAnjum Butt, Uzma Kardar and Ms. Sabiha Shaheen, Executive Director of Bargad joined the press conference.

It was part of a campaign Say No To Child Brides initiated by Bargad. It seeks increasing the marriage age of girls from 16 to 18 year in Punjab. During Say No To Child Brides, Bargad has already organized youth-led rickshaw messages campaign in Lahore, online campaign involving social media influencers, online petition (signed by 22,815 persons so far), multi stakeholders dialogue with parliamentarians, policy makers, government officials, civil society organizations and media, sessions with youth, webinars with decision makers and social action projects led by youth.

PTI’s MPA Sadia Sohail said early age marriage is an evil and must be eliminated from Punjab. She further said that early age marriage is harmful to health and overall wellbeing of girls who are married at very young age as they are not physically or emotionally ready to take responsibilities. According to MPA Uzma Kardar, the ID card must be a mandatory document at the time of marriage for Pakistani nationals whereas passport for foreign nationals because without this people will still keep showing a 10 year old girl as 16 or 18 to avoid punishment or hurdle by law enforcement agencies. PML-N MPA Bushra Butt ensured to pursue the legislative bill laying in the Punjab Assembly which proposes increase in age for marriage of girls in The Child Marriage Restraint Act 1929. MPA Sumaira Bukhari said that the female MPAs fully agree that legislative amendment to The Child Marriage Restraint Act 1929 should be approved as early as possible.

Ms. Sabiha Shaheen said that Bargad has been pursuing the matter of bill amendment in The Child Marriage Restraint Act 1929 since 2015 and we will keep doing so until the bill is approved. We have also been creating the awareness in communities for acceptance and implementation of the very law.

The participants were also presented with results of an online petition initiated by a 14 years girl Nawal. 22,815 persons have endorsed this petition so far demanding the government to increase the minimum age of marriage for girls in Punjab from 16 to 18 years. She aims to collect 50,000 signatures before presenting this to the Punjab Assembly.