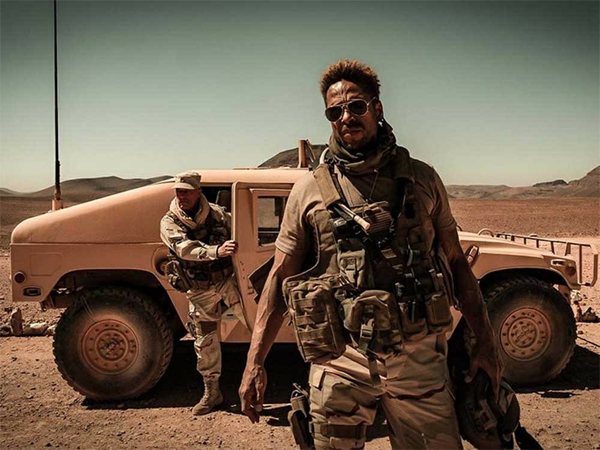 If “Redemption Day” were any more generic, the first thing you’d see on screen would be a bar code in place of the opening credits.

It’s the handiwork of first-time feature filmmaker Hicham Hajji, making his directorial debut after years of assistant-directing gigs for Hollywood and homegrown productions in his native Morocco. And the best thing to say to say about it is, it’s certainly no worse than most other run-of-the-mill, run-and-gun action-adventures that used to proliferate on Blockbuster store shelves and which now feed the seemingly insatiable demand for VOD fare. Trouble is, it’s no better, either.

Gary Dourdan of “CSI: Crime Scene Investigation” fame offers the requisite displays of formidable physicality and authoritative intensity in the lead role of Brad Paxton, a U.S. Marine captain who’s hailed as a hero for his courage under fire during a roadside attack on a humanitarian mission in Syria, and who is haunted by sporadic flashbacks to the violent episode after he returns home to Manhattan.

Hajji deserves credit for grabbing attention during the movie’s opening minutes with an impressively sustained continuous shot that follows Paxton from the military encampment where he receives his mission directive to the remote location of an enemy ambush. The sequence — which, not incidentally, also introduces a key supporting character — raises expectations that, unfortunately, the rest of “Redemption Day” fails to fulfill.

And speaking of dashed expectations: Despite the occasional nightmares fueled by his Syrian experiences, Paxton hopes to enjoy a long period of R&amp;R with his beautiful archeologist wife, Kate (Serinda Swan), and their young daughter. But Kate is sorely tempted to journey afar when she’s offered the opportunity to supervise the dig for a newly discovered ancient city in Morocco. Paxton encourages her to seize the opportunity of a lifetime, so she heads to the planned excavation site.

This, of course, is a big mistake.

Hajji, working from a prefab screenplay cobbled together with co-writers Samy Chouia and Lemore Syvan, makes it emphatically clear that the site is perilously close to Syria. “We are close to the border,” a thoroughly expendable character helpfully informs Kate, her fellow explorers, and the audience. “We have to be careful.” You know what happens in a movie like this when somebody says something like that, right?

Sure enough: Kate and two other members of the excavation team are captured by the minions of Jaafar El Hadi (Samy Naceri), leader of an ISIS-inspired “fringe group,” and spirited back to their headquarters across the aforementioned border. Jaafar demands from the U.S. government a $10 million ransom for Kate’s return, assured that he can seal the deal once he ascertains that — are you ready for this? are you sitting down? — Kate is in the early stages of pregnancy.

Everything that follows in “Redemption Day” is a long and predictable build-up to the big blow-up at Terrorist Central. (One funny moment: A young apprentice terrorist is promised that, if he does a good job while watching over Kate, he’ll get his very own Kalashnikov.) Naturally, Paxton returns to the region to find and rescue his wife, and, just as naturally, he is aided in this endeavor by Younes Laalej (Brice Bexter), the former comrade-in-arms introduced during the opening sequence who’s now a Moroccan government operative.

A conspicuously large number of scenes are interiors, allowing for recognizable co-stars such as Andy Garcia (as a cigar-puffing U.S. ambassador), Martin Donovan (who really, really needs to do another film with Hal Hartley sometime soon) and Ernie Hudson (well cast as Baxter’s boxer-trainer father) to periodically appear in undemanding cameos and pick up easy paychecks. The climactic shoot-out is too dark and muddled to achieve much in the way of dramatic or emotional impact, but it does give Swan the chance to show that, hey, she can handle a gun just like the guys.

There are no surprises here, unless you want to count a last-minute plot twist involving Robert Knepper as a visiting U.S. Congressman. And, really, what’s unexpected isn’t the full-bore cynicism on display, but rather Knepper’s apparent decision to channel the spirit of Foghorn Leghorn during his bit of hambonery.