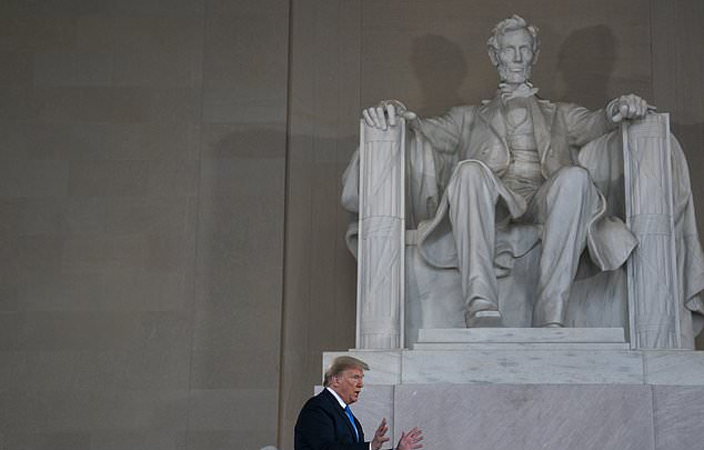 President Donald Trump repeatedly claimed in the final months of his presidency – and without a trace of irony – to have done more for Black Americans than anyone with the “possible exception” of Abraham Lincoln.

He boasted that the African American unemployment rate dropped to record lows under his watch before the coronavirus pandemic ravaged the economy. Trump heralded his administration´s criminal justice overhaul for shortening mandatory minimum sentences for nonviolent drug offenses and leading to the release of thousands of incarcerated people, mostly Black Americans. Trump also relished that he increased funding for historically black colleges and universities.

But in the end, historians say Trump´s legacy – and his electoral undoing – will be largely shaped by rhetoric aimed at stirring significant swaths of his white base that tugged at the long-frayed strands of race relations in America.

His strategy of divisiveness was on display this past week as he urged supporters, mostly white men, to descend on the U.S. Capitol in the name of his baseless claims of election fraud.

After the pro-Trump mob stormed the hallowed halls of Congress, Trump did not immediately condemn the violence. He did not denigrate the rioters as “THUGS” or warn that he was prepared to greet them with “vicious dogs” and “ominous weapons” as he had threatened largely peaceful Black Lives Matter demonstrators after the police killing of George Floyd this year.

Instead, his initial response was a series of tepid tweets and video messages in which he asked his violent loyalists to “go home in peace,” let them know he felt their “pain” and told them he loved them.

Trump was frequently explicit in using race as a cudgel.

He claimed without evidence that Barack Obama, the nation´s first Black president, wasn´t born in the United States, has said Mexican immigrants were “bringing crime” and were “rapists” and argued there were “very fine people on both sides” after violence at a white supremacist rally in Charlottesville, Virginia, left one counterprotester dead.

He privately questioned why the United States would accept more immigrants from Haiti and “shithole countries” in Africa rather than from places such as Norway. Trump even wrote in a tweet that appeared to be intended for a group of then-first-term lawmakers – progressive Democrats and women of color – to “go back and help fix the totally broken and crime infested places from which they came.”

“Since the Black civil rights movement of the mid-20th century, there has been this kind of tacit agreement in the American political conversation that one could appeal to racial animus, but you had to do so in a particular sort of way,” said Eddie Glaude, Jr., chairman of Princeton University´s African American studies program. “Trump made that all explicit again. He brought it to the fore. He mainstreamed certain assumptions about race that were driving our politics anyway.”

Human rights activists say that the Capitol siege was the macabre ending of a presidency that embraced white supremacist groups and extremists and fanned the flames of chaos and violence.

“This is a moment of reckoning for the United States,” said Bob Goodfellow, interim executive director of Amnesty International USA. “President Trump has repeatedly encouraged violence and disorder by his supporters. These are not the actions of a leader, but an instigator.”

The New York real estate tycoon rose to the presidency despite his complicated past with his hometown’s Black and Latino communities. There was his refusal to apologize for harsh comments in 1989 about five Black and Latino men who as teenagers were wrongly convicted in a jogger’s brutal rape in New York City’s Central Park. Trump paid for newspaper advertisements back then calling for New York state to adopt the death penalty after the attack.

Early in his real estate career, Trump and his father were sued by the Justice Department for violating fair housing laws by discriminating against Black applicants. The Trumps ultimately entered a consent decree but did not admit guilt.

Trump’s 2016 White House win over Democrat Hillary Clinton was aided by the first decline in Black voter turnout in 20 years. Since his November loss to President-elect Joe Biden, he has made unsubstantiated allegations of voter fraud in large urban centers such as Detroit, Milwaukee and Philadelphia – all areas with big African American electorates – that proved critical to Trump’s defeat.

There has been no evidence of the massive fraud or gross error that Trump and his team alleged in scores of lawsuits that judges, whether appointed by Republicans, Democrats or Trump himself, systematically dismissed.

Still, the Republican National Committee, in the aftermath of Trump’s loss, has tried to cast the Trump era as one in which the GOP loosened the Democratic grip on Black voters.

“Because of his leadership we have changed the political map forever and Republicans have a road map on how to be competitive and victorious in nontraditional communities,” RNC spokesman Paris Dennard said in a statement.

The Rev. Marshall Hatch, a civil rights activist in Chicago, said that Trump´s defeat at the polls brought a moment of relief.

But Hatch said his joy quickly was eclipsed by the recognition that some 74 million Americans were OK voting for Trump even though he repeatedly has played down white supremacy, vilified women of color and tried to diminish the issue of racial injustice in American policing.

Hatch leads the New Mount Pilgrim Missionary Baptist Church in Chicago´s West Garfield Park neighborhood that still has scars from the riots that followed the Rev. Martin Luther King Jr.´s assassination more than 50 years ago. The predominantly Black neighborhood has been disproportionately affected by the toll of the coronavirus pandemic.

The areas surrounding the church have among the highest infection rates in the state. Hatch’s church community has lost several congregants – including his older sister, Rhoda Jean Hatch – to the virus.