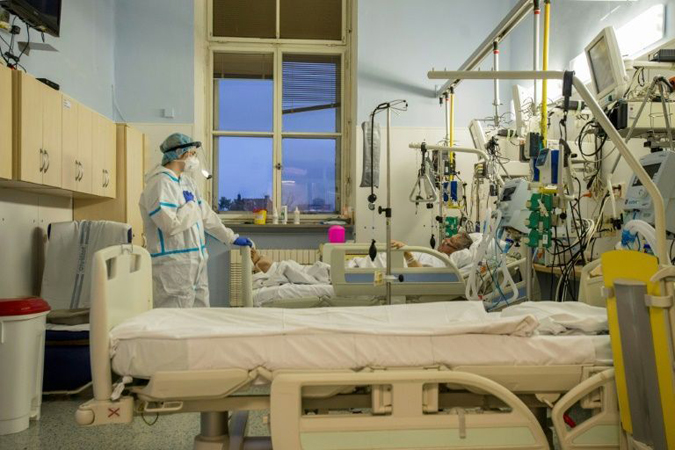 Hundreds of medical students have volunteered to help out in Czech hospitals packed with Covid-19 patients where staff are struggling with one of the highest infection rates in the world.

Wrapped up in protective gear including a visor and two pairs of rubber gloves, student Tereza Zalesakova, 22, performs a blood sugar test on a woman with Covid who is on a breathing aid.

She then moves on to the next bay in the intensive care unit of Prague’s General University Hospital to help feed a coughing and wheezing elderly man.

“I started to work here at the beginning of November because they lacked auxiliary staff,” said Zalesakova, a medical student at Prague’s Charles University.

“If the nurses don’t need me, the doctors often let me perform different medical interventions which I wouldn’t do as a student,” she told AFP.

“It’s a priceless experience,” said Zalesakova, who hopes to become a surgeon some day.

Hospitals across the Czech Republic have been on the verge of maximum capacity since the autumn, when the EU member of 10.7 million people saw a massive spike in Covid cases.

It had Europe’s highest per capita Covid-19 daily death rate for several weeks in October and November, and the contagion rate in recent days has been higher than in the United States.

The Czech health ministry has registered more than 800,000 confirmed cases since the March outbreak, including 12,800 deaths.

“The hospital capacity is close to its limit. The main reason is the absence of staff primarily due to Covid-19 infections,” deputy health minister Vladimir Cerny told reporters on Friday.

‘An awful lot of work’

To cope with the burden, the government has called on students as well as soldiers to help in hospitals or retirement homes.

The university medical students come forward on their own initiative and get paid as part-time staff.

“The students do an awful lot of work and we’re really grateful for that,” said Petra Havrlikova, a matron on the General University Hospital’s fourth internal medicine ward.

“They help us position the patients, they help with the morning hygiene, send samples to labs or disinfect the rooms,” she said.

“I think many of them saw a patient up close for the first time here,” Havrlikova told AFP.

Resting after a three-hour stint at the intensive care unit, medical student Karolina Nekolova, 22, braces for another round there over a box of chocolates she shares with nurses.

“The toughest thing is to cope with a patient’s death, that’s sad and nobody has prepared us for that,” she said.