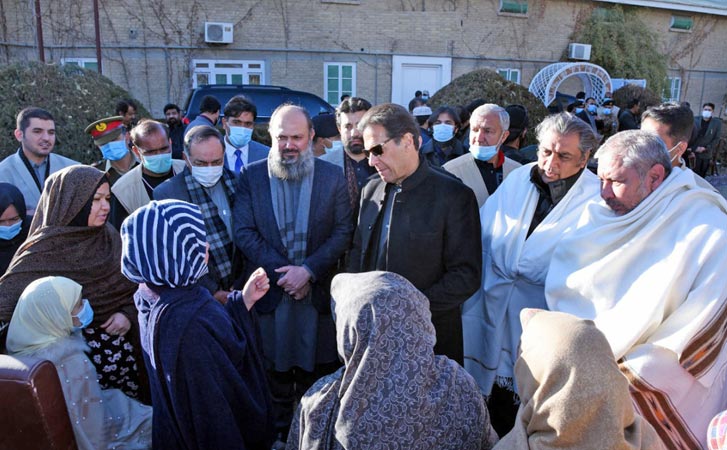 Prime Minister Imran Khan on Saturday assured the bereaved families of Hazara community that the federal and provincial governments were making out all efforts to protect them.

Talking to the members of Hazara community, the prime minister expressed the resolve that government would chase down the culprits involved in Machh tragedy and would bring them to justice. He said India has been involved in such nefarious terrorist activities to create disharmony and sectarian strife in the country. “It is a part of that wider plot hatched by India to destablize the country and stir sectarian divide,” the prime minister said lauding efforts of Inter Services-Intelligence for foiling a number of such plots aimed at targeting the religious leaders and creating chaos in the country.

“Not only I am sharing your grief but the whole nation shared it. The whole nation stands with you, my government, provincial government and the intelligence agencies are standing with you,” he said. “My mission is not only to unite the whole country but the entire Muslim Ummah. To end this divide, we have tried to remove differences between Saudi Arabia and Iran,” he added

He further noted that Hazara community had suffered immensely in the hands of terrorism in past. He said that he had visited them in the past and faced threats when he condemned a sectarian group. Sharing grief of the community, the prime minister cited Amna bibi who lost her five brothers in the tragedy and Mohammad Sadiq who was the only bread earner of his sisters. The prime minister said he had sent federal ministers including interior minister Shaikh Rashid to console them and assure government’s full protection.

The prime minister reiterated that the government would go behind the terrorist elements involved in the killing of Hazara people. There were 35 or 40 terrorist who had been involved in terrorism, he said, hinting at creation of a cell of security forces to give full protection to the community and eliminating terrorists.

The prime minister further said that he had come to give the bereaved families and their community full confidence. He said that he had requested them to bury their dead, adding that he was in constant touch with all the stakeholders over the incident.

The prime minister separately met a number of bereaved families and underscored that the government would fulfill all its promises made with Hazara community. He said that he is aware of the sectarian group that targeted the Hazara community and that the last time that he had visited the place and taken their name, the group had threatened him as well. “I understand all of your issues; I might be the only politician who understands your 20-year-old [struggle],” he said, adding that he aimed to do two things – assure the aggrieved families and then the community – that the federal government would ensure their safety.

The prime minister, speaking about his delay in visiting them, said that a premier has a lot of matters to deal with as compared to the common man. “When I wasn’t prime minister, I had visited you.”

“Nobody can guarantee that an unfortunate incident won’t take place in the country,” he said, adding, “That is why I had asked your community to bury the deceased, and then I would visit you.” “But when you keep conditions, then it becomes a precedent. Today Imran Khan is the prime minister, tomorrow someone else will be,” he noted.

The premier said that he wants to categorically state that the whole while he was “completely” in touch with his ministers and the security forces and sought updates on the sit-in. “I want to say again, not only I, but the whole country was sharing your sorrow and pain.” He thanked the families for listening to the government and going ahead with the burial. “The whole nation will continue to stand with you, as will the provincial and federal governments, the security forces; I came here to tell you that we will take full care of these children and our sisters.”

The funeral prayers of the coal miners have been offered after nearly a week-long sit-in by the Shia Hazaras in the provincial capital. The miners were laid to rest in the Hazara Town graveyard. A large number of people gathered for the burial of the miners.