Taylor Swift’s fans are convinced new song is about Karlie

* In 'It's Time to Go,' fans raised eyebrows when they heard the lyrics, 'When the words of a sister, come back in whispers, that prove she was not, in fact, what she seemed' 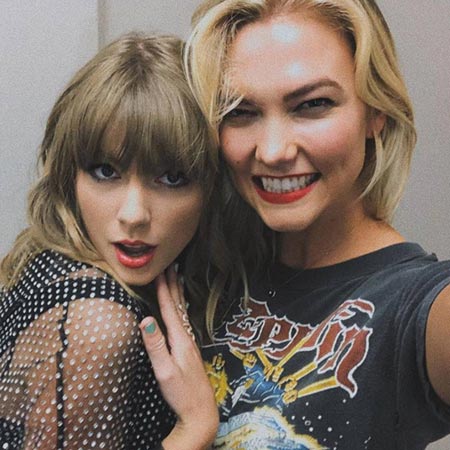 Swifties, it’s time to dissect new Taylor Swift music! On Thursday, Jan. 7, the 31-year-old Grammy winner surprised fans when she released two new evermore songs on the deluxe version of the album. As you likely could have guessed, loyal followers immediately began listening to the new tunes. And according to some, one track may just be about Karlie Kloss, 28.

In “It’s Time to Go,” fans raised eyebrows when they heard the lyrics: “When the words of a sister, come back in whispers, that prove she was not, in fact, what she seemed. Not a twin from your dreams, she’s a crook who was caught.”

Some on social media were quick to speculate that the words are in reference to Karlie. Both stars, however, haven’t commented on the theories.

For the past couple of years, fans have speculated that Taylor and Karlie’s friendship isn’t as strong as it once was. For starters, Karlie was not featured in the singer’s “Look What You Made Me Do” music video.

In addition, Taylor did not attend the supermodel’s October 2018 wedding to Joshua Kusher. Fans later realized she was performing on the other side of the world thanks to her reputation tour.

Some on social media were quick to speculate that the words are in reference to Karlie. Both stars, however, haven’t commented on the theories

But in March 2019, Karlie set the record straight and made it clear that there’s no bad blood with the music superstar. “Taylor’s incredible and I feel really lucky to call her a friend,” she shared on Watch What Happens Live. “She’s one of the hardest-working women.”

However, fans began to speculate about their friendship once again when T.Swift was absent from Karlie’s star-studded wedding celebration in June 2019. Guests at the second bash, held in Wyoming, included Katy Perry, Orlando Bloom and Taylor’s music rival, Scooter Braun. Now, fans are buzzing over these new song lyrics, which appear to reference a falling out.

While the celebs have not shared the current status of their friendship, it won’t stop fans from speculating about Taylor’s latest bonus tracks that also include a song called “Right Where You Left Me.”

Evermore, the sister album to Folklore, topped the Billboard 200 chart when it was released last month. Both albums, recorded during the coronavirus pandemic, received positive reviews from fans and critics alike.

“I have no idea what will come next,” Taylor previously shared on Instagram. “I have no idea about a lot of things these days and so I’ve clung to the one thing that keeps me connected to you all. That thing always has and always will be music. And may it continue, evermore.”