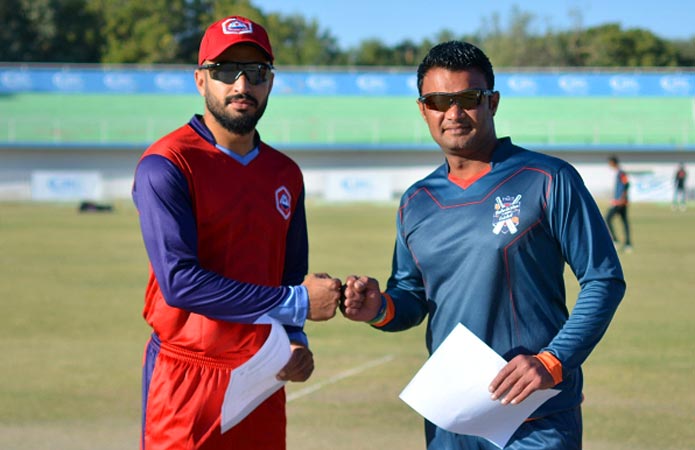 KARACHI: As many as five centuries were scored in the first three matches of the Pakistan Cup One-day Tournament 2020-21 which commenced at three Karachi venues here on Friday. Salman Ali Agha, Umar Amin and Musaddiq Ahmed score match-winning tons that earned wins for Southern Punjab, Northern and Khyber Pakhtunkhwa respectively. Besides the trio, Central Punjab’s Saad Nasim and Muhammad Akhlaq also scored hundreds but their efforts went in vain at the NBP Sports Complex.

Southern Punjab captain Sohaib Maqsood won the toss and asked Sindh to bat first, opener Sharjeel Khan (44 off 38, three fours, three sixes) provided the side a flying start after the early loss of Khurram Manzoor (1). Captain Saud Shakeel and Asad Shafiq added 66 runs for the third-wicket before Asad fell to Aaron Summers for 45 (46 balls, five fours). Wicketkeeper batsman than upped the scoring rate for Sindh with a whirlwind 69 off 36 balls, the right-hander hit eight fours and three sixes. Saud fell for 60 off 78 balls (three fours), Hassan Khan scored an unbeaten 38 off 28 balls to take his side past the 300-run mark, Sindh were bowled out for 309 in 49.1 overs. Pacers Mohammad Ilyas and Summers took three wickets each.

Salman (player-of-the-match), who was one of the leading scorers in the recently concluded Quaid-e-Azam Trophy, continued his rich vein of form by scoring a sparking unbeaten 106 off 75 balls that took Southern Punjab home. The right-hander, who came into bat at number five in the batting order, hit nine fours and three sixes in his innings. Opener Zain Abbas who had retired hurt came back to finish the chase with Salman, he remained unbeaten on 75 off 79 balls (nine fours). Sohaib contributed 36 off 28 balls (three fours, two sixes). Southern Punjab chased down the target for the loss of six wickets in 48.3 overs. Anwar Ali and Mohammad Umar took two wickets each for Sindh.

An unbeaten 115-run innings off 136 balls (seven fours, two sixes) by Umar Amin guided Northern to their 285 for seven score after they were put into bat by Balochistan at the UBL Sports Complex. The left-handed Umar added 106 runs for the fourth-wicket with captain Mohammad Nawaz who scored 60 off 65 balls with the help of six fours. No other Northern batsman crossed the 30-run mark in their innings, Raza-ul-Hasan and Umaid Asif took two wickets each for Balochistan. Balochistan were bowled out for 249 runs in the 47th over in reply. Captain Imran Farhat top-scored with 49 off 46 balls (five fours). Ayaz Tasawar made a 44-run contribution (51 balls, three fours, two sixes). All six frontline Balochistan batsmen got starts but failed to convert them into substantial performances. Northern bowlers made vital breakthroughs at crucial junctures to ensure their side’s comfortable 36-run win. Aamer Jamal, Nawaz and Mubasir Khan took two wickets each. Umar Amin was named player-of-the-match

Centuries by captain Saad Nasim and Muhammad Akhlaq took Central Punjab to their 305 for seven total after they were put into bat by Khyber Pakhtunkhwa. Akhlaq and Saad added 210 runs for the fourth-wicket, wicketkeeper-batsman Akhlaq’s 117 was compiled off 115 balls and included eight fours and four sixes. Saad took the attack to the Khyber Pakhtunkhwa bowlers in his stroke-filled 101-run innings off 86 balls, the right-hander hit seven fours and four sixes in his innings. Arshad Iqbal with two wickets for 63 runs was the most successful Khyber Pakhtunkhwa bowler. Khyber Pakhtunkhwa chased down the score in 46.3 overs, courtesy a dazzling unbeaten 103 off 97 balls by Musaddiq Ahmed who came into bat after openers Fakhar Zaman and Israrullah had added 80 runs for the first-wicket. Musaddiq hit seven fours and three sixes in his match winning effort that won him the player-of-the-match award. Fakhar scored 70 off 69 balls with the help of five fours and three sixes while Israrullah contributed 40 runs. Captain Khalid Usman scored an unbeaten 35 off 25 balls laced with three fours and one six in an 88-run partnership for the sixth-wicket with Musadiq that took Khyber Pakhtunkhwa to victory. Waqas Maqsood took three while Qasim Akram took two wickets for Central Punjab.