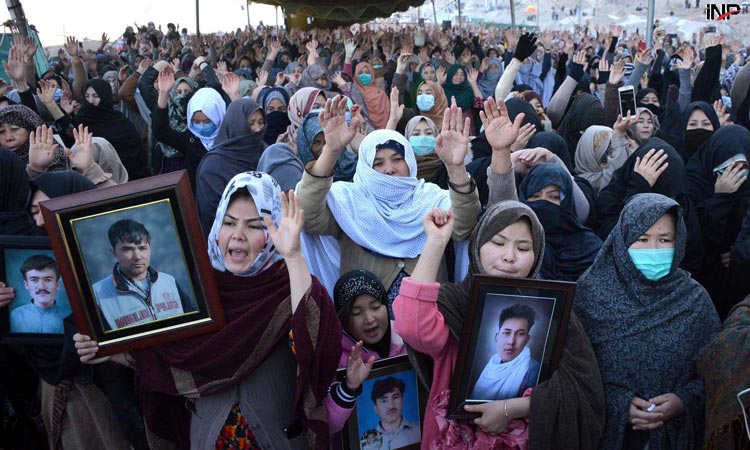 Mourners at the protest camp of the Mach incident have rejected Prime Minister Imran’s Khan’s condition of burying the victims as a condition for visiting them.

“There will be no burial and the protest sit-in will continue,” Arbab Liaquat, focal person for the committee representing the mourners, declared a few hours after Imran Khan gave the statement at a ceremony in Islamabad. “You are saying you will come after burials, why not before? How can we believe that Imran Khan will come,” the focal person said.

Commenting on the tag of “blackmail”, Arbab Liaquat asked that how can the Hazara community blackmail the Prime Minister. “Are we political?” he asked, adding that more protesters were joining the camp while the government of Balochistan had failed to provide them with security.

Imran Khan had said on Friday that he will visit the protest camp in Quetta only after the Hazara community buries the victims of Sunday’s massacre in Mach.

Responding to demands placed by the victims’ families that they won’t bury the victims unless the Prime Minister visits them, Imran Khan said that, “We can’t do this if you set conditions for burial of the dead. If you bury them I will take a plane and come and meet you today,” he said, asserting that he would not be “blackmailed” by the victims. As many as 11 coalminers belonging to the Hazara community were murdered in Mach, 60 kilometers south of Quetta, on Sunday morning. Terrorists allegedly checked their ID cards before shooting them dead. In Quetta, the protest camp set up the families of the coalminers has entered its 6th day, asking Prime Minister Imran Khan to visit, assure them of providing safety to Hazaras and arresting the perpetrators of the massacre.

Meanwhile, at least five motorcycles were set ablaze on Friday, reportedly after commuters clashed with Shia community protesters near Drigh Road, Shahra-e-Faisal in Karachi. The countrywide protests that began days ago, to express solidarity with families of 11 Hazara community miners in Mach last week, have spread to over 15 different spots in Karachi.

Roadblocks put in place owing to the protests have resulted in gridlocks across the city at peak hours. However, traffic is being diverted from affected roads to alternative routes.

The Shia Ulema Council, Majlis Wahdat-e-Muslimeen, Imamia Students Organisation along with other members of Shia community, have been staging sit-ins at multiple spots across Karachi, to express solidarity with the miners’ families.

PIA spokesperson Abdullah Khan had said traffic congestion on the routes towards the Jinnah International Airport caused difficulty for passengers and staff trying to reach the airport.

Multiple PIA flights from Karachi to Lahore, Islamabad, Peshawar and Faisalabad were either cancelled or delayed by a few hours, the airline had said, urging passengers to stay in contact with its call centre for updates.