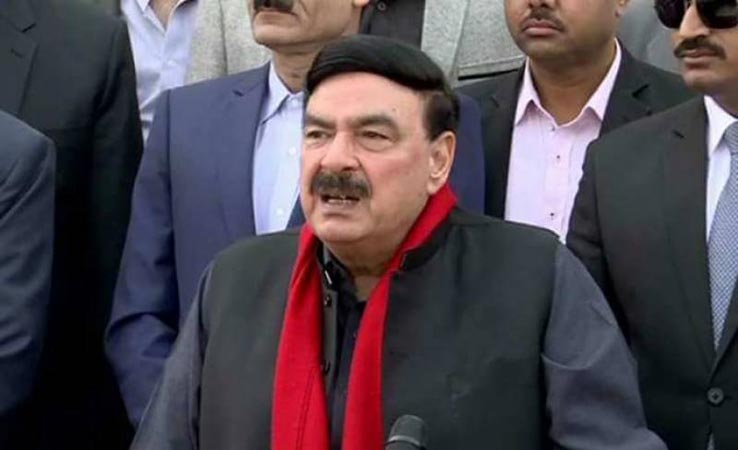 Federal Minister for Interior Sheikh Rashid Ahmed on Friday hoped that the matter of burial of martyred coalminers belonged to Hazara community in Quetta will be amicably resolved, after which Prime Minister Imran Khan will be among them.

Addressing a news conference, the federal minister stated that he had submitted a report based on the demands of the protesting Hazara community members to the prime minister for the redressal of their grievances.

He said the religious and tribal leaders would hopefully convince the families of slain miners to bury the bodies of their loved ones, soon after which the prime minister will be among them and will have detailed discussion with them to address their grievances.

“The dead bodies of the slain miners should be buried in view of sanctity of the martyred. We have sought help from the religious leaders of Ahl-e-Tashee, scholars and Majlis Wahdat-i-Muslimeen (MWM) to convince the families to bury the martyred”, the minister said.

He said Special Assistant to Prime Minister Zulfi Bukhari and Federal Minister Ali Zaidi were already present in Quetta to condole with the bereaved families.

He said there were certain reasons (including security matters) behind the delay in the Prime Minister’s visit to Quetta which cannot be made public. Prime Minister had always shown great sympathy and love for the Hazara community and is pursuing his vibrant political approach of rooting out sectarianism and terrorism from the country.

The federal minister said international elements were involved in targeting Hazara community. Four such criminal groups have been caught from Sargodha, Bhara Kahu and Karachi which were involved in instigating sectarian violence and intended to kill religious scholars.

“It is a sad state of affairs that some sections are politicizing this matter while there is a lot of time for politics in the future”, he lamented.

Sheikh Rashid said that seven martyred Afghan’s in another incident will also be compensated in the same way as Pakistanis martyred in the Machh tragic incident.

To a question, the federal minister pointed out that there were security threats to at least 20 people including religious leaders who have been conveyed already. Frontier Corps had already been instructed to search the areas on larger scale so that the culprits could be taken to task.

The minister also confirmed that a new wave of terrorism exist in the country including Islamabad, Lahore, Quetta and Peshawar which were on high alert. There were threats from Indian Raw agents and those who work on the payroll of others, he pointed out. Responding to another question, Sheikh Rashid said Bilawal Bhutto and Maryam Nawaz have made political speeches during their visit to Quetta for condoling with the families of martyred. While, Jamiat-i-Ulema- Fazal leader, Ghafoor Haideri provoked the families by saying, “Remain stick to your stance of not burying the martyred”.

The minister said that his ministry was in efforts to improve law and order situation in the country. The facility of online visas had been introduced while 100,000 Computerized National Identity Cards will be issued on a daily basis. The unnecessary police checkpoints will be removed to facilitate the people and replaced by digital surveillance cars. Federal Investigation Agency, National Database Registration Authority and Interior Ministry will be transformed into exemplary institutions, he said.