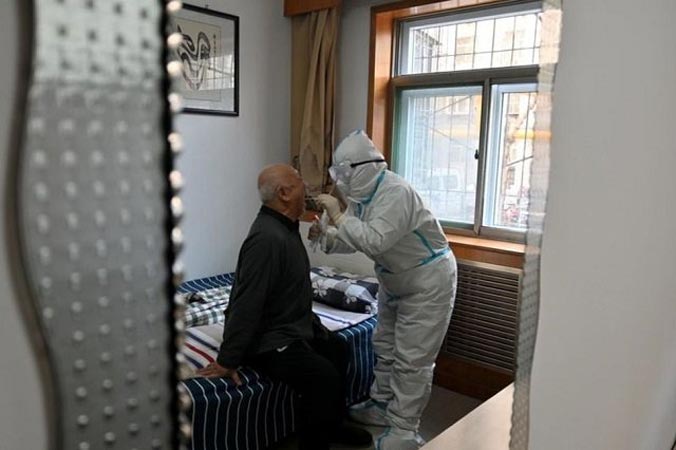 Beijing closed places of worship on Friday and authorities in the Chinese capital restricted access to a highway to the city of Shijiazhuang, nearly 300 km (185 miles) to the southwest, which is battling a new cluster of coronavirus infections.

The number of new cases in China remains small compared with outbreaks in some other countries, and compared with early last year at the height of its outbreak, which emerged in the central city of Wuhan in late 2019.

Authorities have taken aggressive measures, including mass testing and sealing off of high-risk communities, to stamp out new clusters but small outbreaks have been flaring, especially as winter set in. All of Beijing’s 155 religious sites were closed to the public, a city official said, while some entry and exit ramps to the highway to Shijiazhuang were blocked off. Festivities for next month’s Lunar New Year have also been banned in rural parts of the sprawling capital.

In Shijiazhuang, the capital of Hebei province that surrounds Beijing, most flights in and out were cancelled on Friday, as of late afternoon, according to Flightradar24, a day after the city of 11 million barred people from leaving. Shijiazhuang accounted for 31 of the 37 new locally transmitted COVID-19 cases and 35 of the 57 asymptomatic cases reported in mainland China on Thursday.

The city has launched a local COVID-19 testing drive, banned gatherings and ordered vehicles and people in high-risk areas to remain in their districts to keep the infections from spreading.

The northeastern province of Liaoning, which reported two new local infections and one new imported infection on Thursday, also said on Friday it had extended the quarantine period for arrivals from overseas to 21 days from 14.

Once those people are released from quarantine, they will be monitored for another seven days in their homes.

They will be asked to avoid unnecessary trips and public transport and to stay away from group activities during the monitoring period, Liaoning Daily, the official newspaper the provincial committee of the Communist party, reported on Friday. Meanwhile, the industrial city of Chifeng in Inner Mongolia, some 340 km northeast of Beijing and not far from the region’s borders with Hebei and Liaoning, has gone into “war-time mode” in the fight against the virus, its government said. Hebei entered the same mode on Tuesday.

People in Chifeng must not go out unless strictly necessary, and checks on vehicles will be stepped up on highways connecting the city to Hebei and Liaoning, the authorities said. Inner Mongolia has not reported any locally transmitted cases in 2021.

For all of mainland China, new COVID-19 cases reported on Friday fell to 53 from 63 a day earlier. The total number of confirmed COVID-19 cases to date now stands at 87,331, while the death toll remained unchanged at 4,634.

The number of people who have been infected with COVID-19 in the Chinese city of Wuhan, where the virus was first identified, could be around three times the official figure, according to a study by Chinese researchers based in the city.

The paper, published by the PLOS Neglected Tropical Diseases journal on Thursday, analysed blood samples from more than 60,000 healthy individuals taken from locations across China from March to May 2020.

It found that 1.68% of those from Wuhan contained antibodies for SARS-CoV-2, the virus that causes COVID-19, compared to 0.59% in surrounding Hubei province and 0.38% in the rest of China.

With the city’s total population at more than 10 million, the researchers estimated that as many as 168,000 Wuhan residents were infected with the virus, compared to the official number of 50,340 hospitalised cases. The study suggested at least two thirds of the total number were asymptomatic, and thousands could have been infected after the “elimination” of clinical cases, raising the possibility the virus could exist in a community for a long period without causing hospitalisations.

A separate study published by the Chinese Center for Disease Control and Prevention (CDC) late last month put the “seroprevalence” rate in Wuhan, the percentage of the population with antibodies, even higher at 4.43%, implying that around half a million people in the city could have been infected. COVID-19 was identified in Wuhan at the end of 2019, with the first outbreak associated with a seafood market in the city. China finally locked down Wuhan and other cities in Hubei province on Jan. 23, 2020, but critics say it should have acted sooner. China has dismissed criticism of its early handling of the virus, and officials now point to overseas studies suggesting it was circulating in Europe several months before the Wuhan outbreak.

A 10-strong team from the World Health Organization was due to arrive in China this week to investigate the origins of COVID-19, but they have yet to be been given authorisation to enter the country.

Total number of confirmed COVID-19 cases to date in mainland China now stands at 87,331, while the death toll remained unchanged at 4,634.