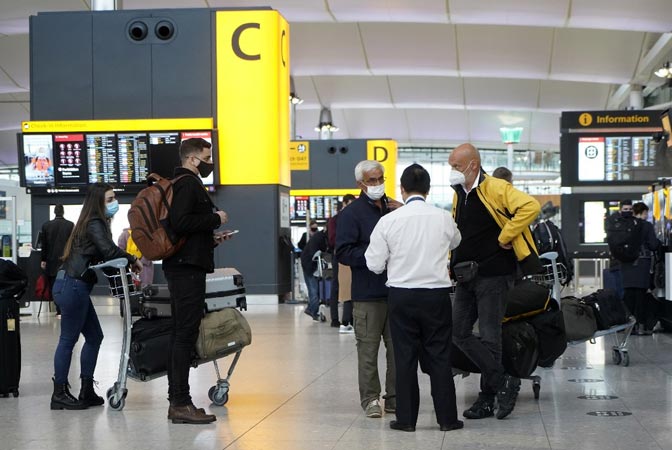 People entering England and Scotland will have to show a negative Covid-19 test result starting next week as authorities try to ramp up protection against new, more infectious strains of the coronavirus from other countries.

Passengers arriving by boat, plane or train will have to take a test a maximum of 72 hours before departure, mirroring measures taken last year by other countries around the world.

“We already have significant measures in place to prevent imported cases of Covid-19, but with new strains of the virus developing internationally we must take further precautions,” Transport Secretary Grant Shapps said.

He said there were concerns that vaccines might not work properly against the highly transmissible variant of the coronavirus discovered in South Africa, echoing recent comments from other government officials.

On Thursday, Britain said it would extend a ban on travellers entering England from South Africa to include other southern African countries, and non-essential travel in and out of the United Kingdom is restricted.

Prime Minister Boris Johnson ordered a new lockdown for England this week after a surge in cases linked to another variant of the virus believed to have originated in the country.

Scotland, which like the rest of the United Kingdom has tight Covid-19 restrictions in place, said it too would require travellers to show negative tests and the rule is also expected to be applied by Wales and Northern Ireland.

Passengers from many countries are currently required to self-isolate for 10 days, or five if they pay for a private test and test negative. Those requirements will remain in place after the new pre-departure testing rule comes into effect.

Britain’s airlines industry recognised the need to introduce pre-departure testing but said it should be only a short-term, emergency measure.

“Once the roll-out of the vaccine accelerates, the focus must be on returning travel to normal as quickly as possible in order to support the UK’s economic recovery,” said Tim Alderslade, chief executive of Airlines UK, an industry group.

“What we’d like to see is that testing before you take off becomes the standard as an alternative to quarantine,” said John Holland-Kaye, chief executive of Britain’s biggest airport Heathrow.

Travel to and from Britain has been almost wiped out by Covid-19 and the quarantine requirements, leaving many airlines and airports fighting for survival.

Exemptions to the new testing requirement rule in England would be offered to hauliers, children under 11, crews and people travelling from countries where tests are not available.

Passengers will be subject to a fine of 500 pounds ($678.30) if they fail to comply with the new regulations.

Meanwhile, Mayor of London Sadiq Khan declared a major incident in the British capital on Friday, saying hospitals in the city were at risk of being overwhelmed if people do not stay at home.

Khan warned that the number of hospital beds will run out in the next few weeks unless urgent action was taken to drastically stop the spread of the disease.

“The situation in London is now critical with the spread of the virus out of control,” Khan said. “One in 30 Londoners now has Covid-19. If we do not take immediate action now, our NHS (National Health Service) could be overwhelmed and more people will die.”

The number of Covid-19 cases in London is now more than 1,000 per 100,000 people, and between Dec. 30 and Jan. 6, the total number of hospital patients in the capital rose by 27%. In the last three days there were 477 deaths of patients who had tested positive for the virus.

The number of people in hospital is 35% higher than during the peak of the pandemic on April, and there are concerns admissions will continue to rise.