* According to NBC News, the Capitol descended into chaos and violence as demonstrators broke through barricades 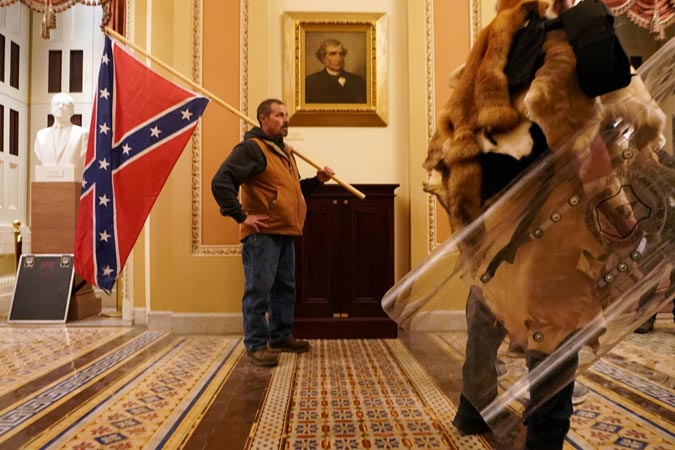 Hollywood is reacting to the ongoing protests at the United States Capitol. As Congress began counting the Electoral College votes on Wednesday, Jan. 6, hundreds of pro-Trump protestors swarmed the U.S. Capitol in Washington D.C.

According to NBC News, the Capitol descended into chaos and violence as demonstrators broke through barricades. Several law enforcement officials tell NBC News at least one person was shot dead inside the Capitol by a member of law enforcement. President Donald Trump-who asked his Twitter followers to “respect the Law and our great men and women in Blue”-has since deployed the National Guard to protect the building.

At the time, members of the Senate as well as Vice President Mike Pence-he was presiding over the joint session of Congress-were evacuated. “The violence and destruction taking place at the US Capitol Must Stop and it Must Stop Now,” he shared on Twitter. “Anyone involved must respect Law Enforcement officers and immediately leave the building.”

As the situation continued to evolve, other political figures like President Elect Joe Biden demanded the disorder come to an end. “This is not dissent, it’s disorder, it’s chaos,” he said during a speech broadcasted from Delaware. “I call on this mob to pull back now and allow the work of democracy to go forward.” Now, several Hollywood stars are speaking out on social media. Keep scrolling to see more reaction.

At the time, members of the Senate as well as Vice President Mike Pence-he was presiding over the joint session of Congress-were evacuated. ‘The violence and destruction taking place at the US Capitol Must Stop and it Must Stop Now,’ he shared on Twitter

Leah Remini: “Praying for our country. Sickened & saddened by what I’m seeing-on so many levels. Cowards. Disgraceful. We will get through this. #CapitolRiots”

Meghan McCain: “This one one of America’s darkest days in our entire history.”

Charli D’Amelio: “Today has been a difficult day for our country my heart is with everyone and im just hoping everyone can stay safe and out of any harm. please everyone in the washington dc area stay safe!!”

Michael Keaton: “I was chased and run through tear gas demonstrating against the war in the 70s. What the police DIDN’T do today was shocking. They sure were ready during the BLM demos which was peaceful.”

Pink: “As a United States Citizen, and the daughter of two veterans, and the sister of another, I am ashamed of what is happening in Washington. Hypocrisy, shame, Embarrassment. Unpatriotic hypocritical sheep drinking poison Kool aid. This a sad day for America.”

Octavia Spencer: “If the election is invalid, then these newly elected people should technically not be in office. How can they reject the top of the ticket, but support their Own wins?”

Gizelle Bryant: “People that don’t live in DC don’t have a full appreciation of how F-ing difficult it is to actually get anywhere near that building and the fact that these hooligans got inside is UNBELIEVABLE.”

Rachel Lindsay: “This is the type of America half the country votes for.”

Ashton Kutcher: “Support the peaceful transition of power!!!!!!!! That’s being a patriot!”

Cardi B: “The irony is pretty funny………weren’t people just wild animals in the summer for demanding justice and now?[thinking face emoji]……Let me just watch.”

Yvette Nicole Brown: “Where are the water hoses and attack dogs? I’m asking for everyone who peacefully marched over the #PettusBridge on Bloody Sunday.” Tatyana Ali: “I am crying tears of rage as I watch how these people, who stormed the capital, r being treated w such care. These individuals will be free to leave after their siege. They have more rights than anyone else & just proved it. What more can they possibly have the gaul to ask for?”