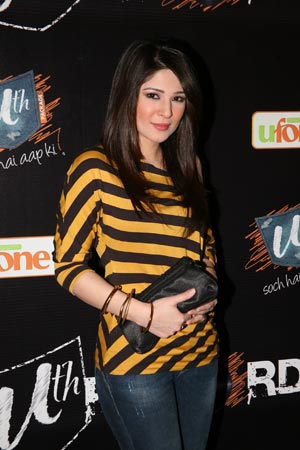 Pakistani star Ayesha Omar humbly responded to critics, who slammed her for wearing a bold outfit during the virtual Lux Awards 2020 ceremony.

Responding to the trolls on Instagram, the Karachi Se Lahore actress wrote, “My humble two bits on this: I’m definitely not promoting/asking/urging women to expose or not expose their bodies. That is their own choice, as wearing this dress was mine. As wearing whatever you want, is yours.”

“This dress was sent to me as it is. I had no input in the design, length, structure or type of dress they were making for me. They only asked for my size. They contacted me themselves and sent me this outfit in June. I wasn’t paid to wear or promote it either and was waiting for an appropriate opportunity to wear it. I’m showcasing their work/talent,” she further said with folded hands and heart emoticons.

She also described the meaning of ‘Empowerment’, saying, “the process of becoming stronger and more confident, especially in controlling ones life and claiming ones rights.”

Earlier a fan commented on Ayesha Omar’s Insta post, saying: “If she is promoting women to expose more of their body (via such clothes), then that’s surely not ‘women empowerment’, such a misquoted term.”