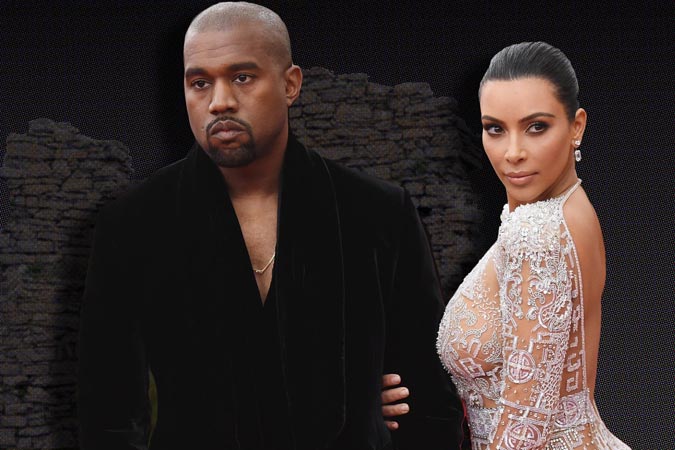 After six years of marriage and more than eight years together, the E! reality TV star and rapper are effectively going their separate ways. Kim, however, has yet to file for divorce.

“It’s gotten to the point where they haven’t spent time together as a married couple in months,” a source tells E! News exclusively. “They’ve seen each other for the sake of the kids but have been living separately. Kim knows the marriage is over. She’s known for a while.”

So why hasn’t Kim made the separation official? Our insider notes, “She wants to make sure she’s making the right decision for the kids.”

‘It’s gotten to the point where they haven’t spent time together as a married couple in months,’ a source tells E! News exclusively. ‘They’ve seen each other for the sake of the kids but have been living separately. Kim knows the marriage is over. She’s known for a while’

Adds the source, “It’s not about the marriage anymore, she’ll always care for Kanye but it’s over between them. Kim is only focused on what’s best for the kids. It’s a tough decision for her and she’s figuring it out.”

Reps for Kim and Kanye did not respond to our requests for comment.

In recent months, the couple’s relationship has faced increased pressure from both external and internal forces. Back in July, Kim spoke out for the first time publicly about Kanye’s mental health following a series of Twitter sprees about their family.

“As many of you know, Kanye has bi-polar [sic] disorder. Anyone who has this or has a loved one in their life who does, knows how incredibly complicated and painful it is to understand,” Kim said in part. “I’ve never spoken publicly about how this has affected us at home because I am very protective of our children and Kanye’s right to privacy when it comes to his health. But today, I feel like I should comment on it because of the stigma and misconceptions about mental health.”

In her message to the public, Kim called for compassion and privacy for their family.

Throughout the rest of 2020, it became more and more clear that Kimye had reached a stalemate in their relationship.

“She is doing her thing and he is doing his,” a source shared with E! News in December. “She doesn’t micromanage it or worry about it too much. She lets him go off and be who he is. It is what it is.”

The SKIMS founder opened up about the ceremony on Keeping Up With the Kardashians. “You are my husband,” she recited to son Psalm while practicing her vows. “You are my best friend. My biggest believer and my one true love.”

Kim, 40, and Kanye, 43, took their years-long friendship to the next level shortly after her infamous, 72-day marriage to Kris Humphries crumbled back in 2011. A year and a half later, Kim and Kanye were preparing to welcome their first child together, North, who was born in June 2013.

Kanye orchestrated an over-the-top proposal for Kim, renting out AT&T Stadium in San Francisco to pop the question in front of their nearest and dearest. They’d go on to tie the knot in an equally as extravagant wedding ceremony in Florence.

After enduring a difficult pregnancy, Kim gave birth to their second child, Saint, in 2015. Because of her health complications, they enlisted the help of a surrogate to welcome daughter Chicago in 2018 and son Psalm in 2019.

Through the ups and downs of their highly-publicized marriage, both Kim and Kanye remained unwavering in their loyalty to each other.

“Everyone would tell him, ‘You can’t be with him. She’s a reality star. She’s going to sink your career,'” Kim recalled on E!’s True Hollywood Story. “And he was just like, ‘But I love her. I don’t care.”

As Kanye would go on to tell it, “Every time I was around her or saw it was a magnetic attraction to this force of energy. She was good, pure, happy, loving, brave, courageous, strong.”