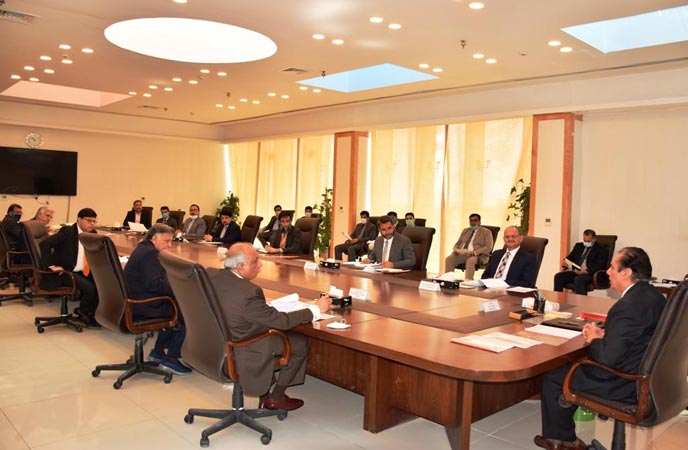 A high level meeting was held today on Wednesday, which was chaired by Honourable Mr. Justice Javed Iqbal Chairman NAB at NAB Headquarters. Mr. Hussain Asghar, Deputy Chairman NAB, Syed Asghar Haider, Prosecutor General Accountability, Zahir Shah, Director General operations attended the meeting whereas all DGs of regional bureaus attended the meeting via video link. The meeting reviewed the performance of NAB Headquarters and all regional bureaus. The meeting reviewed under trial cases in respected Accountability Courts of the Country and decided that the Operations and Prosecution Divisions will jointly supervise and investigation officers and prosecutors in all regional bureaus of NAB would pursue the cases in coordination with law after collecting evidence, verified documents and in the light of witnesses’ statements.The meeting also reviewed improving the standard of conducting complaint verifications,inquiries, investigations and filling of references on the basis of solid evidence as per law. It was decided to impart courses for capacity building of investigation officers and prosecutors to enable them more to meet modern day requirements as per law. The meeting decided to further improve the functioning of the forensic Science laboratory so that the standard of inquiries and investigations could be further improved on a scientific basis. Chairman NAB directed to utilise all available resources for concluding the mega corruption white collar cases on scientific basis so that the corrupt elements could be punished.

Chairman NAB directed that the complaint verifications, inquiries and investigations should be taken to a logical conclusion by taking the benefit of the collective wisdom of the Combined Investigation Team. Proper monitoring of the performance of NAB headquarters and all regional bureaus would be ensured on the directives of the chairman by ensuring persistent vigilance the required legal assistance could be provided if required.

There are more than 1230 references under trial in different respected Accountability Courts of the country. NAB has recovered Rs. 714 billion rupees from corrupt elements which were deposited in national exchequer. Chairman NAB directed all bureaus to ensure that the cases should be pursued in an effective way and make possible efforts for recovery of looted money from corrupt events as per law and subsequently deposit in the national exchequer which is our national duty.

Chairman NAB said that NAB is making sincere efforts in eradication of corruption. The performance of NAB has been lauded by reputed national and international institutes.The increase in receipt of complaints as compared to previous year’s shows enhanced confidence of people in the Bureau. He said NAB officers should utilise their energies on concluding investigations, inquiries on merit in a transparent way. He said that NAB is a people friendly institute . All the people visiting NAB should be dealt with respect and no laxity will be tolerated in this regard.