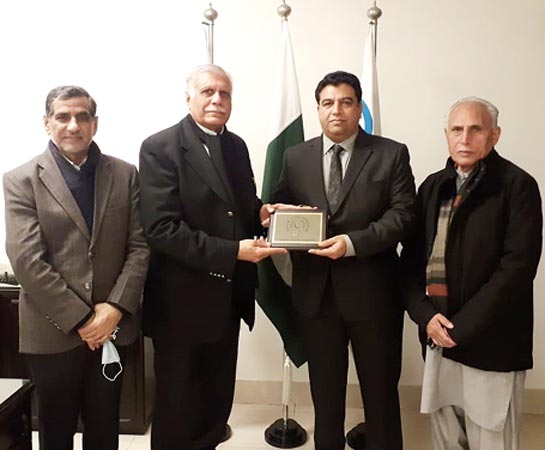 LAHORE: To discuss the holding of 34th National Games in Quetta, as per instructions of Chief Minister Balochistan Jam Mir Kamal Khan Alyani, Balochistan Secretary Sports & Youth Affairs Imran Gichki visited the headquarters of the Pakistan Olympic Association (POA) here on Tuesday. The meeting was chaired by Shaukat Javed, POA Vice President, at Pakistan Olympic House Lahore. Also present on the occasion were POA Secretary General Muhammad Khalid Mahmood, POA Treasurer Muhammad Shafiq and POA Associate Secretary General Ahmer Mallick. “A brief history of the National Games was presented to Gichki and he was also assured that the POA will provide every kind of support to Balochistan in organising the 34th National Games in Quetta this year for which proposed dates are to be given by the Balochistan Olympic Association in coordination with the Government of Balochistan,” a spokesman for the POA said on Tuesday.

A POA Venue Committee will visit Quetta on the invitation of the Government of Balochistan and Balochistan Olympic Association to oversee the preparation plan, availability of infrastructure facilities and adequate competition equipment for holding the 34th National Games in Quetta. “The Venue Committee after its inspection will present its report to the Pakistan Olympic Association and final dates for holding the 34th National Games in Quetta in 2021 will be decided and announced keeping in view the international sporting calendar,” added the spokesman. During the meeting, the matter of parallel sports associations was also discussed and Gichki was given assurance that the Pakistan Olympic Association would constitute a committee to address these kind of issues in the best interest of promotion of sports and to provide a better playing field to national athletes.

“Gichki was informed that the POA is also organising the Queen’s Baton Relay (QBR) programme and a QBR Team of Birmingham 2022 Commonwealth Games will visit Pakistan this year for the purpose. Gichki offered the Pakistan Olympic Association to organise the Queen’s Baton Relay Event in Gwadar for which Government of Balochistan will provide its all support to make this event a memorable one and a positive message to the world about Pakistan,” said the POA spokesman. Gichki was welcomed for his kind gesture and it was decided that after meetings with the QBR Team and Pakistan Naval Sports Directorate, which are scheduled in January 2021, proper coordination plan will be shared with the Government of Balochistan.