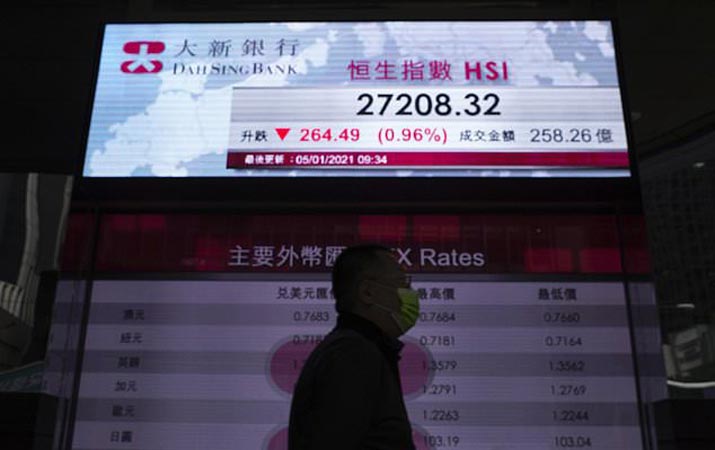 Japan’s benchmark Nikkei 225 edged 0.1% lower in morning trading to 27,232.38, as the government was preparing to declare a state of emergency in Tokyo and several surrounding areas.

Japan’s prime minister has said the government is considering declaring a state of emergency to help curb the spread of infections. The move is expected this week. Tokyo Gov. Yuriko Koike and the governors of Saitama, Chiba and Kanagawa asked the national government over the weekend to declare the emergency after the capital saw a daily record of 1,337 cases on New Year´s Eve. US stocks pulled back from their recent record highs, as big swings return to Wall Street at the onset of a year where the dominant expectation is for a powerful economic rebound to sweep the world.

“With the seven-day average new cases still hanging in the 600 K zone globally, few are likely expecting the market to be spared the resurgence of COVID-19 fears,” said Jingyi Pan, senior market strategist at IG in Singapore.

“Certainly, with the amalgamation of factors ranging from the U.K.´s third nationwide lockdown announcement, US hospitalizations surging to a record and Tokyo mulling a state of emergency, these had all been evidence of the still raging pandemic inducing the risk-off mood to start the year for US indices,” Pan said.

The S&P 500, which ended 2020 at an all-time high, slid 1.5% after earlier dropping as much as 2.5%. It was the benchmark index’s biggest decline since late October. Technology companies accounted for a big share of the sell-off, along with industrial, communication services, health care and other stocks. Only the S&P 500’s energy sector managed to eked out a gain.

The selling comes as coronavirus cases keep climbing at frightening rates around the world, threatening to bring more lockdown orders that would punish the economy. The worsening numbers also raise the possibility that Wall Street has been overly optimistic about the big economic recovery it sees coming because of COVID-19 vaccines. Tuesday’s upcoming runoff elections to determine which party controls the Senate may also be contributing to the volatility.

“We´ve got a wobbly start to the year here,” said Lindsey Bell, chief investment strategist at Ally Invest. “Investors are looking for a reason to lock in profits. The selling is probably a bit overdone.”

Small company stocks, which have been notching solid gains in recent weeks, also fell. The Russell 2000 index of smaller companies dropped 1.5%, to 1,945.91.

Investors have been hoping that vaccines will allow daily life around the world to slowly return to normal. That’s helped spark a recent recovery for stocks of travel-related businesses, smaller companies and other industries left behind for much of the pandemic. In the United States, regulators have already approved two other vaccines. China last week gave the greenlight for its first domestically developed vaccine. Others are also being tested.

In energy trading, benchmark US crude added 14 cents to $47.76 a barrel in electronic trading on the New York Mercantile Exchange. It shed 92 cents to $47.62 on Monday.