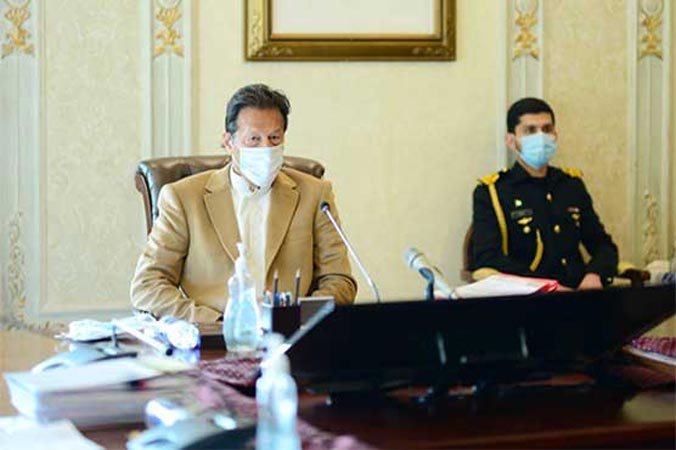 The federal cabinet has accorded approval to the Ministry of Health for the purchase of vaccines to aide Pakistan’s fight against coronavirus.

The cabinet, which met on Tuesday with Prime Minister Imran Khan in the chair, was briefed by Special Assistant on Health Dr Faisal Sultan on the present situation of the pandemic in the country. The meeting exempted purchase of Covid-19 vaccine from PPRA rules.

The meeting also approved the appointment of the Chairman Board of Directors (BOD) of Pakistan Expo Centres Private Limited. It also approved the constitution of a special committee to adjudicate on the appeals made under Clause 21 of the Trade Organisations Act, 2013. The committee would be able to exercise its authority after the completion of amendments to the relevant laws. The meeting also accorded approval to the appointment of members of the Press Council of Pakistan.

In order to improve the quality of exports in the fisheries sector, the cabinet okayed the constitution of the Inspection Committee, which would perform duties of inspection of the Fish Processing Plants to be established in the country.

The Inspection Committee consists of representatives of the Ministry of Maritime Affairs, Ministry of Commerce, and Pakistan Fisheries Exporters Association.

The cabinet accepted the resignation of Dr Rana Abdul Jabbar as chief executive officer (CEO) of the Alternate Energy Development Board (AEDB) and approved the constitution of a selection committee for the appointment of a new CEO.

The managing director of the Private Power Infrastructure Board (PPIB) would look after the AEDB till the appointment of the new CEO. The cabinet endorsed the decisions made by the Cabinet Committee for Legal Cases in its meeting held on December 31, 2020.

The cabinet also offered Fateha for the souls of labourers gunned down in Mach coalmine incident, for Osama Satti who was allegedly killed by police firing in Islamabad, and for the martyrs of the Pakistani armed forces.

Adviser to Prime Minister for Parliamentary Affairs Babar Awan raised the issue of the youth’s killing in Islamabad and presented the stance of the victim’s parents. On this, PM Imran Khan expressed grief and said that such ruthless people should not be part of the police.

Meanwhile, Federal Minister for Information and Broadcasting Senator Shibli Faraz on Tuesday said a transparent inquiry would be conducted into the brutal killing of colliers in Mach area of Balochistan and their killers would be brought to justice.

The massacre of innocent workers of Hazara community was a tragic incident that had saddened the whole nation, he stated in an interview to a private television channel.

The coal miners were a soft target of terrorists, who might have links with “an enemy country”, he added.

About the gruesome murder of Osama Satti by the police, he said Prime Minister Imran Khan had expressed grief over the killing of a young man in the federal capital, besides the miners’ murder in Mach.

The information minister assured that after detailed inquiries, action would be taken against the perpetrators of brutal acts.

Commenting on the opposition’s verbal attacks on the ruling party, he said there was no harm in having positive criticism, but the opposition parties were portraying the constructive work of Pakistan Tehreek-e-Insaf (PTI) government negatively.