MQM’s style of governance depriving Karachi of its rights: Bilawal

* PPP chairman questions MQM’s motives, says he is unable to understand party’s coalition with PTI govt
* Says MQM failed to get Karachi its rights despite being in power for many years 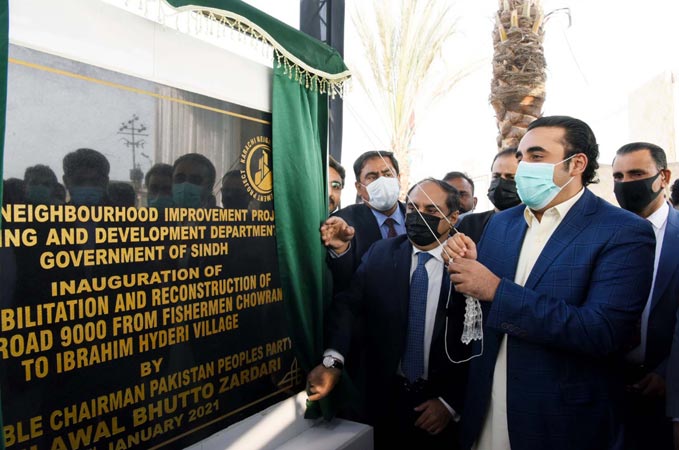 Pakistan People’s Party (PPP) Chairman Bilawal Bhutto Zardari on Tuesday said that he is unable to understand why the Muttahida Qaumi Movement Pakistan (MQM-P) is standing with the PTI-led federal government, adding that instead of focusing on “its own helplessness which forced it to form a coalition with the government, it should think about the helplessness of people.”

He was speaking at the inauguration ceremony of the second phase of the Karachi Neighbourhoods Improvement Project.

Bilawal said that despite being the biggest city of Pakistan, as well as the economic hub of the country, the needs of Karachi and its people have been historically ignored.

“Unfortunately, those who have been elected from this city have long been part of different governments throughout history, however, they failed to get the city’s rightful share from the Centre,” Bilawal said.

The PPP chairman added that when the World Bank had said that the infrastructure of the city will cost $10 billion and “we raised the issue, our demand was subjected to mockery”.

“If we invest in Karachi, the whole country will benefit from it. The Sindh government is doing whatever it can to alleviate the problems of Karachi,” he maintained. He said that despite the scarcity of resources, the PPP-led provincial government is serving the masses, adding that after inaugurating the People’s Square in Karachi, his government has inaugurated the Fishermen’s Square in Korangi.

Taking a jibe at the MQM, Bilawal said that representatives of the party had been “selected” even before he was born. “Ask MQM workers what they have done for the people of Korangi so far,” Bilawal remarked, adding that those in the corridors of power “that enjoy being in the government” must pay attention to the people of Karachi. He said that MQM’s style of governance is depriving Karachi of its rights, adding that he is “unable to understand MQM’s [motives].”

“The public does not want MQM to stay with the government for one more day,” he said. “The government was established because the MQM voted in its favour.”

He said that if the census is conducted in a wrong way, there will be objections on it, and the PPP has been resisting on this issue on every forum since day one.

“No one has done as much work as the PPP has done for the infrastructure and development of this city,” he said.

The PPP chairman added that the media does not report on the positive work of the PPP government. “Our focus is on Karachi, and despite the economic difficulties, we are reaching everywhere. As the saying goes, “Rome was not built in a day”, all the problems of Karachi cannot be solved immediately, but we are working day and night to provide world-class facilities to the citizens here.”

Bilawal Bhutto said that PPP has been standing as the voice of fishermen against the occupation of the islands and now the illegitimate presidential ordinance of the federal government has come to an end. The islands belong to the local fishermen. Until the fears of the people of this land are allayed and they are satisfied, we will not allow a single brick to be laid on these islands.

The PPP Chairman said that fishermen have been living in Karachi even before the formation of Pakistan, which is now under siege and pressure from all sides. There are complaints that they are harassed when go to sea. The Sindh government is working on this issue and a solution will be worked out jointly with the concerned institutions but the respect of the fishermen should be kept in mind.

Meanwhile, Sindh Chief Minister Murad Ali Shah, while addressing the function, said that at present the opposition is convening meetings and making plans to tarnish image of the PPP provincial government, which is doing a lot for the people.

He said that the federal government has given Rs 63 billion less than fair share to Sindh during the current financial year. Provincial Ministers Syed Nasir Hussain Shah, Saeed Ghani, Sohail Anwar Sial and Shehla Raza, Advisor to the Chief Minister Murtaza Wahab, Special Assistant Waqar Mehdi and other leaders were also present on the occasion.