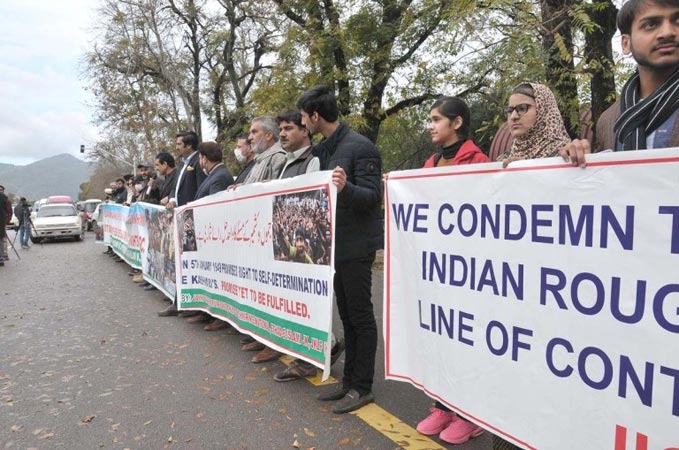 A large number of protestors gathered outside the Indian Embassy here on Tuesday to protest persistent Indian brutalities against innocent people of the Indian Illegally Occupied Jammu and Kashmir (IIOJK) on the occasion of Kashmiris Right to Self-determination day.

The day is marked globally on January 5 every year to remind the United Nations (UN) to fulfill its commitment by granting the right to self-determination to the people of IIOJK.

Speaking on the occasion, the representatives of various Kashmir forums including Jammu and Kashmir Forum France, Friends of Kashmir International, and Jammu and Kashmir Liberation Front said people across the globe and living along the so-called Line of Control (LoC) observed the day in the first month of every year.

The speakers while drawing the world’s attention towards the post-August 05, 2019 situation in IIOJK, said the people of the occupied valley were being deprived of their basic rights including food, health, and medicines as well as freedom of expression.

They passionately called upon the UN to take practical measures for implementing the resolution, adopted by its commission for India and Pakistan on January 5, 1949, promising right to self-determination for the Kashmiris.

Condemning Indian state terrorism in the IIOJK, they said the Modi-led government in IIOJK were challenging the world conscience by killing youth in fake encounters and putting them in jails on fake accusations of terrorism.

The speakers highlighted the grave violations of human rights in the IIOJK, exhorting the UN to immediately stop India from its illegitimate and inhumane acts.

They said the Kashmiri people had great respect for Pakistan as it had been continuously extending diplomatic, political, and moral support to them for the last several decades.