Minorities are safe in Pakistan: Governor 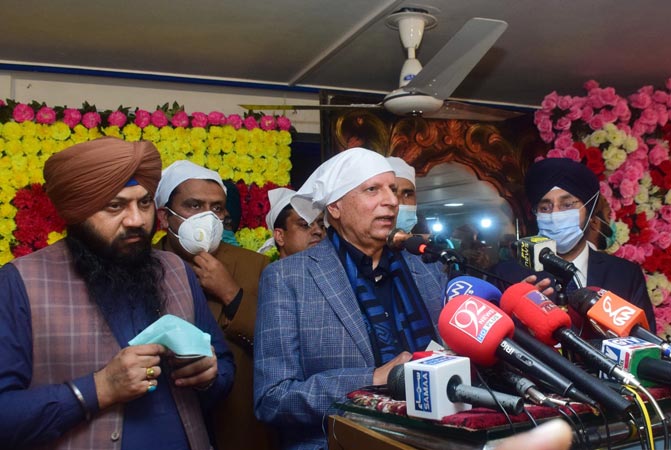 Punjab Governor Chaudhry Mohammad Sarwar has announced that mass marriages of 15 deserving Sikh couples and the artificial forest near the Head Baloki will be named after Baba Guru Nanak. He also distributed ration among 500 deserving minority families while Punjab Governor Chaudhry Mohammad Sarwar while talking to media said that 2% quota for employment of minorities in Higher Education Department would also be implemented. Narendra Modi is the killer of minorities and Kashmiris living in India.

The UN should declare India and Narendra Modi as terrorists. He was talking to media on the occasion of the birthday of 10th Sikh Guru, Guru Gobind Singh on Tuesday. PTI MNA Shehnila Ruth, minority MPA from PTI, Sardar Mahindar Pal Singh, Political Secretary to Governor Punjab Mian Kashif Iqbal were amongst other attendees from the Sikh community. Talking to the media, Governor Punjab Chaudhry Mohammad Sarwar said that Prime Minister Imran Khan will not resign before January 31 but he will complete his constitutional term as the Prime Minister.

There are as many narratives as there are parties in PDM. I am certain that the general elections in Pakistan will be held on time. Responding to a question, Chaudhry Mohammad Sarwar said that since the formation of the opposition alliance PDM, none of their promises and claims have been fulfilled, so there is no doubt that the PDM is clueless about its strategy. Addressing the event after distributing ration to poor families, Governor Punjab Chaudhry Mohammad Sarwar said that minorities in Pakistan enjoy religious freedom. We are giving all the rights to the minorities of Pakistan, in line with the vision of Quaid and Iqbal, while the silence of International bodies, including the United Nations, on the predicament of minorities in India is shameful.

The time has come to declare India a terrorist state as well as to ensure the protection of lives and property of Kashmiris and Indian minorities and to give freedom to Kashmiris. Minority MNA Shaneela Ruth and MPA Mahindra Pal Singh said that we are proud that the government under the leadership of Prime Minister Imran Khan is not only ensuring the provision of all basic facilities to the minorities but is also standing by the deserving families during the Corona Crisis. Later, During a Shield distribution ceremony among Sundas Foundation volunteers, who served on the frontline during Coronavirus, Governor Punjab Chaudhry Mohammad Sarwar said that those who serve humanity live forever in history. The role played by the business community and philanthropists during the Corona is commendable.