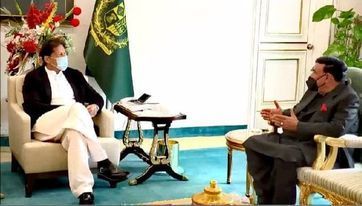 ISLAMABAD: Interior Minister Sheikh Rashid Ahmed called on Prime Minister Imran Khan here on Tuesday and updated him about his meeting with the protesting Hazara community in Quetta.

On the directives of the Prime Minister, Sheikh Rashid had visited Quetta and held a meeting with the representatives of Hazara community regarding the incident of killing of miners in Mach area of Balochistan.

Political situation in the country also came under discussion during the meeting, the PM Office said.