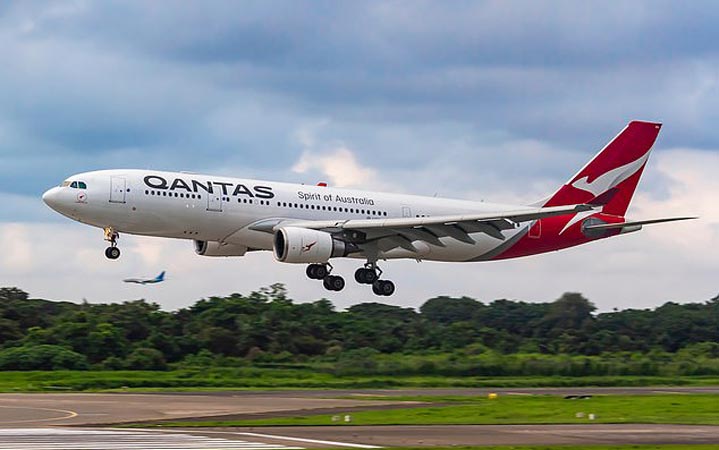 A leading aviation group has revealed the world’s 20 safest airlines for 2021 – and it’s Qantas that’s No1 again.

The ranking has been drawn up by Australia-based AirlineRatings.com, which monitors 385 carriers and takes into account audits from aviation governing bodies, government audits, airlines’ crash and serious incident records, fleet age and pilot training and culture.

The editors of AirlineRatings.com

noted that over its 100-year history as the world’s oldest continuously operating airline, Qantas ‘has amassed a truly amazing record of firsts in operations and safety and is now accepted as the industry’s most experienced airline’.

AirlineRatings.com editor-in-chief Geoffrey Thomas said: ‘Australia’s Qantas has been recognised by the British Advertising Standards Association in a test case as the world’s most experienced airline.

The editors of AirlineRatings.com noted that over its 100-year history as the world’s oldest continuously operating airline, Qantas ‘has amassed a truly amazing record of firsts in operations and safety and is now accepted as the industry’s most experienced airline’

‘Qantas has been the lead airline in virtually every major operational safety advancement over the past 60 years and has not had a fatality in the pure jet era.’

In second place is Qatar Airways, followed by Air New Zealand in third, Singapore Airlines in fourth and Emirates in fifth.

Thomas added: ‘These airlines are standouts in the industry and are at the forefront of safety, innovation, and launching of new aircraft.

‘In fact, there is very little between the top 20, they are all standouts.’

AirlineRatings.com has also identified the top 10 safest low-cost airlines for 2021.

Meanwhile, for the first time this year, AirlineRatings.com has named its top 20 Covid-19 compliant airlines, those which it believes have ‘gone above and beyond in the protection of passengers or in adding flexibility to travel’.

The aviation group assessed airlines on website information about Covid-19 procedures, the provision of face masks for passengers and personal protective equipment for crew, the modification of meal services, the deep cleaning of aircraft, the provision of a personal sanitiser kit and social distancing on board.

Mr Thomas said: ‘All these airlines have been trendsetters in making travel as safe as possible.’

News of the world’s safest airlines comes just days after another annual report revealed that the number of people killed in large commercial plane crashes rose in 2020 to 299 worldwide, even as the number of crashes fell by more than 50 percent.

More than half of all deaths in the To70 review were the 176 people killed in January 2020 when a Ukrainian plane was shot down in Iranian airspace. The second deadliest incident was the May crash of a Pakistan airliner, killing 98.

The decline in crashes came amid a sharp decline in flights due to the coronavirus pandemic. Flightradar24 reported commercial flights it tracked worldwide in 2020 fell 42 percent to 24.4million.